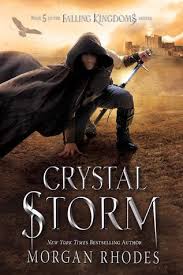 Overview (No Spoilers): Upon finishing the preceding novel, Frozen Tides, I was left rather let down and disappointed in a book that is a part of my favorite young adult series. My major complaint centered on the overwhelming feeling that my near and dear characters were just pawns moving around the board, preparing for the next big novel. Due to the residual feeling left over from reading Frozen Tides, my expectations for Crystal Storm were mediocre at best. With that being said, I couldn’t put down Crystal Storm, which hooked me right from the onset. It was refreshing to step back into a world I thoroughly enjoy, picking up with the characters immediately following the cliffhangers of the previous novel. While Cleo and Magnus’ interactions could best be described as frustrating, the remainder of the cast more than made up for the star crossed lovers growing pains. We learn more about the Watchers, the King of Blood, and read with entertainment as many of the characters are forced to interact in ways previously unimaginable. Overall, Crystal Storm was a delightful continuation of the Falling Kingdoms series that will leave the reader eagerly anticipating the following book as a result of several incredibly suspenseful cliffhangers.

Five months and so many giggles! 💚
Quinn was totally engrossed in the moving, vibrant colors of @vangoghdetroit! Special day with Grandma @joan.obrien.1690 and Aunt Jillian. 💚
You should hear this girl talk. I can hardly get a word in! 💚 4 months!
End of summer vibes! Our garden wasn’t as productive as last year but it tried hard to make up for it with the amount of potatoes that we found.
Follow The Critiquing Chemist on WordPress.com