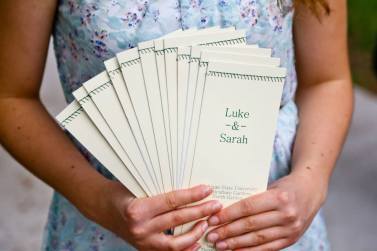 For the past few months I’ve toyed with the idea of expanding my blog to include some of my creative projects. One of the sticking points that I kept coming back to was that my blog was originally suppose consist entirely of book reviews, as such, would I be diluting my original premise by including other aspects of my life, e.g., travel, beekeeping, and now DIY? Due to the success of branching out into travel, I’ve decided to start including some of the projects I’ve most enjoyed figuring out. Most of the projects that I undertake consist of me figuring things out as I go, with the help of many other bloggers and tutorials that I will recognize throughout the instructions.

The first project I’ll detail are my wedding programs, which were one of my favorite tasks I undertook during my wedding planning. As the wedding drew near, with all of the main details already planned, I realized that I hadn’t even begin to think about the programs. My initial opinion was that programs were a waste due to most guests ignoring or throwing away the scrap of paper immediately following the ceremony. As such, my plan was to spend little to no money on the programs by using materials I already had on hand. As with many of the details regarding my wedding, I wanted the finished product to be unique and have my own personal twist.  My initial idea involved something similar to these two beautiful programs, e.g, petal fan 1, petal fan 2. I soon disregarded this style after coming across the layered format e.g., Example 1, Example 2, however most of the examples I stumbled across in this layout were bound by a ribbon, which I was not necessarily a fan. Inspiration struck when I found this image of a beautifully machine stitched wedding program, specifically the unique binding. As the pieces came together, I knew I wanted to make a three layer, cardstock wedding program using paper left over from making my DIY wedding invitations, and have the binding be machine stitched. My next question involved the quandary, can you machine stitch cardstock? After a bit of Googling, I came across this wonderful tutorial, which I loosely followed, but gave me the encouragement needed that the design I had dreamt up was indeed possible. I fully recommend using the aforementioned tutorial instead of mine as a base point if you want to tackle this fun idea. Let it be said that I am not proficient at sewing, however I have a general knowledge from observing my Grandma for years and a sewing machine from one of my many short lived and subsequently discarded hobby phases. I have faith ANYONE can do this project!  This was the perfect project because I used materials I already had on hand therefore I didn’t spend a penny on my final wedding programs.

As excited as we are to be home in wintery Michigan, we can’t help but miss Jordan’s warmer weather. Especially when reflecting back on our rainy morning snorkeling in the Red Sea!
The last day of our memorable trip was filled with delicious food and more sights around Cairo. The hieroglyphs at the ancient Saqqara and Step Pyramid were the highlight of the day! 💚
With a grandeur that defied any preconceived expectation the Great Pyramids of Giza are in a class of their own!
Our tour of Wadi Run was beyond anything we expected, with this unique, expansive landscape hiding new surprises around every bend. Wadi Rum will always have a sweet spot in our hearts after the amazing lodgings we stayed in, our wonderful tour guide Ayman, and the breathtaking views. The red sand that is all over our luggage and our sunburns prove to be fond reminders of our adventure filled day!
Follow The Critiquing Chemist on WordPress.com