Looking up from my books for a Cross Country Adventure!

Your brother calls and inquires as to your interest regarding accompanying him on an eight state cross country road trip from Portland, OR to East Lansing, MI to take his dog to our parents while his is traveling for his job. The catch, the plan will not be set in stone till the day before you are scheduled to leave, therefore you will have to buy your ticket a day in advance.

Ok. Not so hypothetical. I’m blessed that my job offers my that grade of flexibility and for the last five days my brother, Petey (his dog) and I have been on an amazing cross country road trip through eight states and four different national parks/lake shores. Since I didn’t manage any reading time in the many, many hours on the road, with belting out summer hits from the 2000s taking priority, I decided to write up a little bitty about our beautiful trip.

Samuel and I have both adventured the route to Yellowstone through South Dakota several times but we have never traversed the northern US 2 through Montana and North Dakota.  Better yet, there were three  National Parks that we had yet to visit along our planned trip.

Our first stop was Glacier National Park in western Montana. Having been raised in rural south central Michigan my whole life, mountains have always possessed a sense of wonderment for me. I couldn’t stop staring, perhaps gawking would be a more appropriate term at the mountainous landscape. Despite the hikes we had planned on undertaking being still closed with due to snow and the main road being closed due to a washout, what we were able to see was beautiful beyond words and I can’t wait to explore this park more in the future! 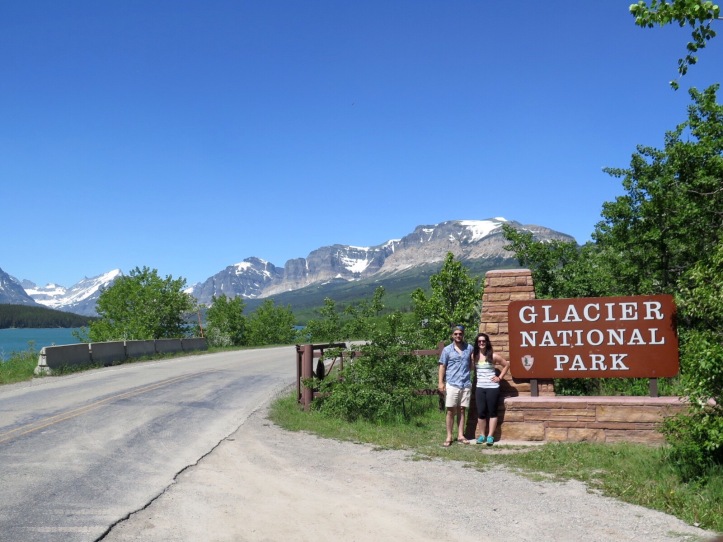 On a random stop for Petey in Montana we discovered a beautiful river with tons of butterflies. My 7 year old self was in heaven! We found out after the fact that there were over 200 grizzly bears in the area. Thankfully we didn’t encounter any of the locals! 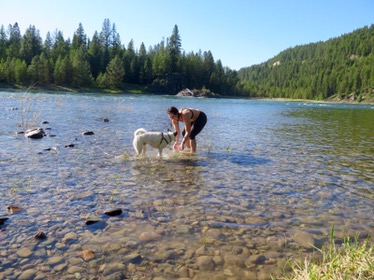 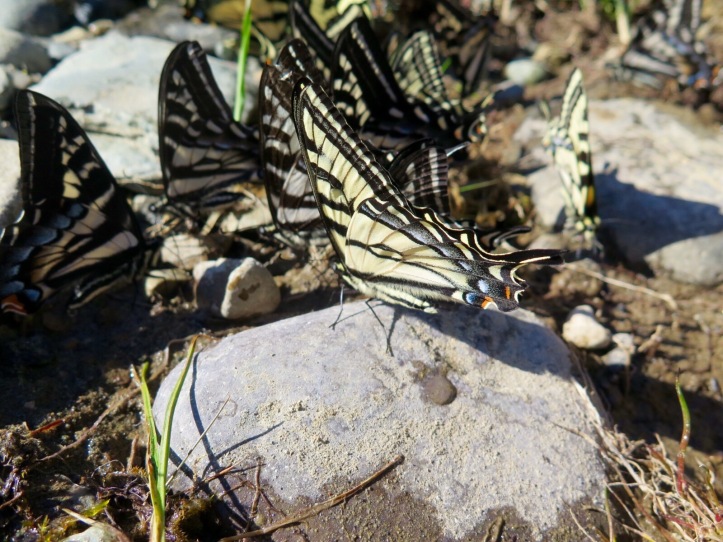 Our third day of travel brought us to Theodore Roosevelt National Park in western North Dakota. The landscape, rolling and colorful, was unlike anything I’d seen before. The Badlands National Park may be the only park I can think to compare it to, however the two are still very unique in their own rights. The park has a 40ish mile scenic drive that was perfect for road trippers like Samuel and me. If we had enough time we would have loved to hike to the petrified forest, however if you have keen eyes you’ll be able to spot some pieces along the scenic route. One of the most exciting aspects of the park is the amount of wildlife roaming free. We saw wild horses, bison, and more prairie dogs than we could count. Samuel and I even made a game where every animal was worth a point value, e.g., bison=5, horses=3, etc., and awarded to the person who spotted the animal first. I’m not going to announce the winner, but let it be known I can be a sore loser. Of note, if you start to get low on gas in North Dakota do NOT push your luck! The gas stations are few and far in between. I’m thankful we somehow made it to a station in time.

Voyageurs is Minnesota’s only National Park and is located in the far north east corner by Lake Superior. The park is fascinating due to the fact that there are no roads. The only way to traverse the park is on the water. We stayed in an adorable little cabin at the Arrowhead Lodge and Resort where the sweetest couple took great care of us even though we didn’t arrive until almost midnight. Larry even gave us a personal tour of the park the next morning,  which was much more efficient than us renting a boat and probably getting lost. He even pointed out a bald eagle on her nest! Much to his protest, I woke Samuel up at 3:30am to try to go find the northern lights. We think we saw them, or maybe the sun was starting to rise due north at that time? Let’s just say we saw them and check that off the bucket list. Speaking of my bucket list, we saw a moose too! It ran out in front of us on the road in Minnesota and I think I’m still in disbelief how big it was! 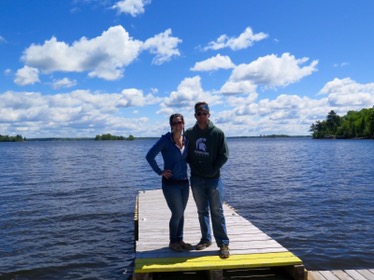 Finally making it to our home state, we only made two stops in the UP. We scaled Sugarloaf Mountain in Marquette to get some amazing views of Lake Superior and the aforementioned city. 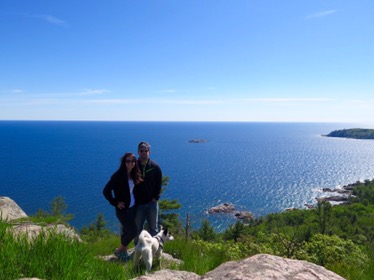 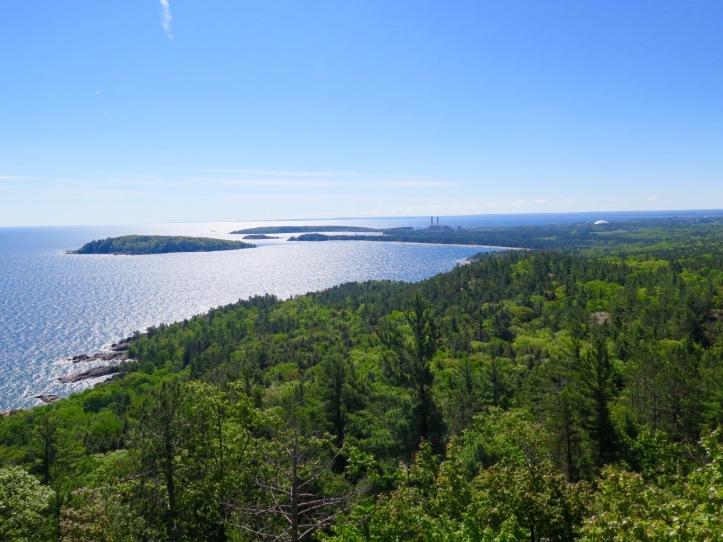 Our last stop before the bridge was the beautiful Pictured Rocks National Lakeshore. If you haven’t heard of this area, stop everything you are doing and google it! This area should be on everyone’s bucket list to visit. I’m not being bias because I had lived my whole life in Michigan without having visited until two years ago when my husband proposed on the remote Chapel Beach. This particular beach, only accessible by a 3 mile hike, not only has spectacular views of Lake Superior, but also a waterfall. What is more romantic than an isolated beach and a waterfall! Unfortunately, we only had time for me to show Samuel Miner’s Castle. Till next time! 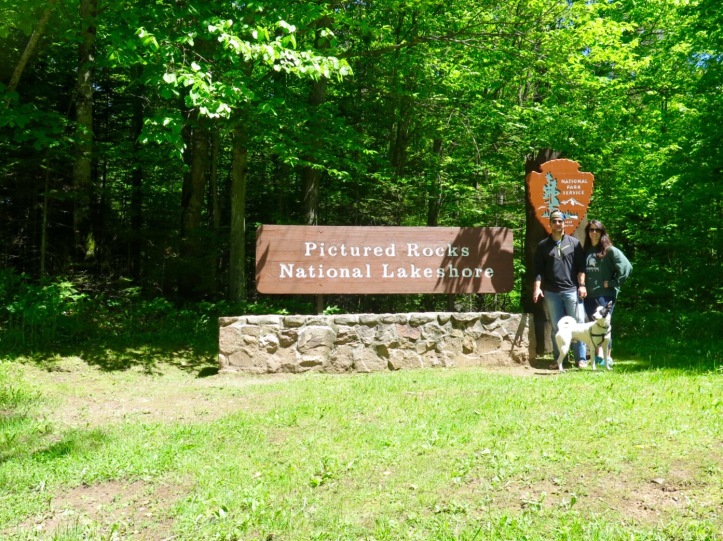 Overall, we had an amazing trip! I’m looking forward to taking Luke on a similar trip next summer since he has never been on a road trip out west. Did I miss any key spots that Samuel and I should have visited on our long drive?