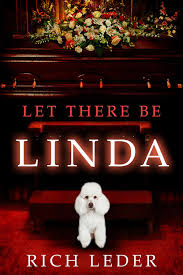 Leder’s black comic caper tells the tall tale of estranged brothers Mike and Dan Miller—accountant and con-man talent agent respectively—up to their necks in the virtual quicksand of LA’s San Fernando Valley during the hottest summer in Southern California history.

The root cause of their problems could be the missing seventy-five thousand dollars, or the sadistic, loan shark dwarf and his vicious giant, or the psycho comedian cop on the case, or the coke-snorting dentist, or the deranged zombie real estate developer. Or perhaps it’s the poodle—the poodle is suspect, no doubt. Or maybe it’s the grocery store checker who breathes life into death. Oh yes, it could be her too.

And so to repair the head-on collision the Millers have made of their personal and professional lives, the brothers summon their mother back from the dead to clean up the wreckage. But what the Miller men discover is that screwing with the laws of nature is forever and always a violent, bloody, hysterical, and hilarious idea.

As my very first early review, Let there be Linda by Rich Leder will be officially released July 1st 2016. Despite horror thriller genre not typically being one I actively seek out, my interest in the book was piqued after having been pitched the book ‘as Monty Python meets Quentin Tarantino and all hell breaks loose.’ Thus after receiving the ebook, I promptly dove into the lives of the Miller brothers and the mess they promptly find themselves. Humor is such a fascinating concept due to the range of topics in which people find absolute hilarity, where as others do not. Therefore, I should probably preface my review with the fact that I find people’s lives falling apart, especially in the financial realm to be less than humorous, even though in books and movies I know that it is meant to be funny. Usually I can play along and still understand/appreciate how the writer and audience intended or , or in the case of the latter, find the situations comical. Remember Identity Theft, with Jason Bateman and Melissa McCarthy? I spent most of the movie feeling increasingly uncomfortable rather than laughing, as my brothers easily laughed throughout. Similarly, I had flashbacks to that movie as the everyday lives of these characters fell more and more apart with every turn of the page in Let there be Linda. I can recognize the fact that the witty humor was indeed present, and that probably most people will find the bad luck surrounding these characters in surmounting sidesplitting relief. As such, if you’re someone that is drawn to these situations in movies or books, you’ll love the mounting tribulations experienced by these unfortunate characters. Overall, Let there be Linda was filled with misfortune, blood and gore, along side witty comedic twists as all the character quickly becoming irrevocably intertwined in a clever twist of fates with selfish greed at the heart of their ultimate motive.

I felt as though the overarching writing style was cleverly written to mirror that of Detective Shuler’s attempted comic routine. As with Shuler’s comic routine, the intertwined stories of the dentist, the zombie, the agent, the giant, the perverted clown, the accountant, and the other characters in this twisted thriller became more bizarre as the tale progressed. Just as in Shuler’s comic routine, in which he employed the ‘thought that great comedic stories should have three loose ends,’ Let there be Linda also has three main loose ends that the reader is left pondering about. Listed below are my main three loose ends as well as a few other comments or questions I was left with.

8 months! Quinn is up to six teeth and is so very close to walking. She also brought home Covid last week from daycare. Thankfully she and I both have mild symptoms and Luke managed to avoid getting it. We’ve had a week full of snuggles and chasing her around the house as she is constantly exploring.
I hope you can find the same joy Quinn had this morning upon vanquishing her arch nemesis, the puffs container.
Merry Christmas from Quinn! 💚🎄🎅
Who knew seven months could go so fast?
Follow The Critiquing Chemist on WordPress.com