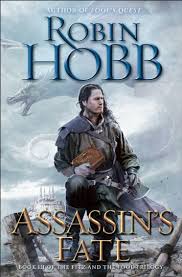 Overview (No Spoilers): Eagerly anticipating the release of the Assassin’s Fate, the final installment of the Fitz and the Fool trilogy, I was beyond excited to receive the ARC early last week. Having left Bee and Fitz in their precarious situations in October of 2015, I had to struggle to remember key events and characters in the preceding novels for the first couple of chapters, making my initial progress proceed at a snail’s pace. Slowly, and with the assistance of Google, the fog began to clear allowing this marathon tale to take shape, thereby drawing me back into the fold. Throughout this series, Hobb weaves a story that contains such a plethora of details that is thoroughly satisfies my analytical soul. Prior to this trilogy, I had not read any of the previous series by Hobb that employs the same realm and key characters, as well as detailing the notable adventures, which are mentioned throughout these new novels. As the Fool’s Assassin was my introduction to Hobb as an author, I was initially worried that my lack preceding knowledge regarding world building and depth established by the former series (The Farseer Trilogy, Liveship Traders Trilogy, The Tawny Man Trilogy, The Rain Wild Chronicles) would hinder my overall enjoyment and comprehension of the trilogy. In contrast, despite the potential aforementioned handicap going into the Fitz and the Fool Trilogy, I became thoroughly engrossed, relishing in the level of detail and the skill at which Hobb was able to reference past events and relationships without leaving new readers behind. I’m sure I would have had greater appreciation for trilogy and key interactions had I read more of her work, however this set of work was able to easily stand on its own. it was not necessary to s. Overall, this delightful adventure containing elements of survival, rescue, and dragon, was impossible to put down, as such, I have no qualms about labeling this final installment a perfect conclusion to the Fitz and the Fool trilogy.

When reading it is common that I encounter words that I’m not privy to the exact definition, however it is easy to infer the meaning of the aforementioned word based on the context of the sentence and story. As such, new to the Critiquing Chemist, you’ll find an additional section that includes vocabulary words that I encountered upon reading the book being reviewed and either had to look up the definition or it is a word in which I would like to add to my repertoire. This endeavor is easier when in the Kindle format, and potentially impossible with audiobooks, however I’m going to attempt to continue this section for all future book reviews. I’ll be using the definitions from the Merriam-Webster Dictionary.

Striate: to mark with a minute groove, scratch, or channel especially when one of a parallel series

Miasma: a vaporous exhalation formerly believed to cause disease

Nexus: a connected group or series

Offal: the viscera and trimmings of a butchered animal removed in preparing it for market or for consumption

Coquettishly: a woman who endeavors without sincere affection to gain the attention and admiration of men

Espaliered: a plant (such as a fruit tree) trained to grow flat against a support (such as a wall)

Chivvied: to tease or annoy with persistent petty attacks

Portico: a colonnade or covered ambulatory especially in classical architecture and often at the entrance of a building

Contravened: to oppose in argument

Davit: a crane that projects over the side of a ship or a hatchway and is used especially for boats, anchors, or cargo

Adage: a saying often in metaphorical form that typically embodies a common observation

Adroitly: having or showing skill, cleverness, or resourcefulness in handling situations

Foibles: the part of a sword or foil blade between the middle and point

Salable: capable of being or fit to be sold