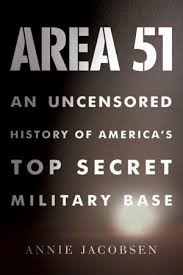 Overview (No Spoilers): Area 51 is a captivating book, which explores the mystery surrounding the notoriously secretive base and was recommended to me by Warren’s Wide World of Randomness. Jacobsen has collected breadcrumbs dropped by the CIA through declassified information and interviews from individuals who worked on the declassified projects and pieced together a sliver of a glimpse into the workings of Area 51. Interestingly, the government still doesn’t acknowledge the existence of Area 51. And rest assured, the book doesn’t focus on the traditional UFO conspiracy theories. Jacobsen has conducted extensive research and has seemingly connected the dots, however some of the claims are a bit much to swallow, despite being fun to mull over and contemplate. Honestly, wasn’t until the last chapter/epilogue where I got an overwhelming conspiracy theory vibe and began to be overly skeptical about the conclusions she was drawing. While most of her book information seemed backed up by both declassified documents and first hand experiences, the bold claims at the end of the book only rely on one source. After reading other reviews about this book, it appears that the material and information, given as hard facts, can be disputed or at least argued, and has been in the media. Overall, Area 51 is worth the read, however the last chapter is regrettable for a story that offers a look into the effort and development of several super sonic spy planes and the ingenious people behind these creations, who otherwise might not have had their story told.