A Gathering of Shadows by V.E. Schwab 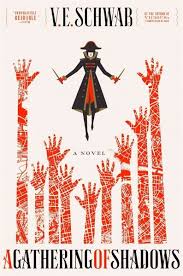 Happy 4th of July everyone! I hope that all of you had wonderful weekends and were much more liberal with their sunscreen than myself!

A Gathering of Shadows is the second book in the Shades of Magic Series. I’d read the first book, A Darker Shade of Magic back in March and upon revisiting my review, I was surprised to find that I could, more or less, copy and paste my previous post and have it pass as a review of its sequel. A Gathering of Shadows takes seemingly half the book to fully get into the plot. While the story had left off fairly neatly after its predecessor, Schwab spent a lot of the beginning of this book fully developing the personalities of Deliah and Kell, as they had previously been lacking. However, in contrast due to the time dedicated to the two main characters, the further development of side characters suffered understandably. Once the story picks up steam, the readers are treated to a delightful tournament full of magic and curious, mysterious developments in White London. Just as the story is reaching the climax of suspense and we start to glimpse the plan that the ultimate evil creature has in store, the second book abruptly ends leaving the reader in a frustrating position of reading a story that has only moved pawns throughout. Overall, I’ll repeat my complaint from A Darker Shade of Magic. Schwab has created a fascinating and intriguing world, however has yet to pour that same level of development into her characters. She doesn’t lack for mysteries surrounding these chosen few characters, alas has yet to yield only but a few chosen secrets. If only there had been a few more veils lifted, the result would have added a depth needed to fully connect with the story and characters.