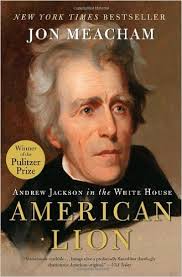 Overview (No Spoilers): The American Lion was an excellent reminder that I’ve been incredibly spoiled with the nonfiction I’ve read over the last year. The Innovators, Clouds of Glory, Cleopatra, and The River of Doubt, to name a few, all conveyed mass amounts of information to the reader in a nonbiased, clear manner. I finished each of the aforementioned books feeling as though I had gained significant knowledge and insight based both on the person being highlighted as well as the time period in which they inhabited. However, from the beginning of The American Lion, Meacham seemed to take an overly biased viewpoint in favor of Andrew Jackson. Frustratingly for the reader, anyone who opposed Jackson or his posse was portrayed as the enemy. While I fully understand that this novel was not intended as a complete biography of Jackson, instead focusing on the people that surrounded him during his time in office, the biased nature made me feel as though I could only take the author’s conclusions with a grain of salt. With that being said, I also felt as though I learned more about court scandals during this time period than the policies shaping the nation. I know I’m exaggerating on this point but I wish more time would have been spent on the latter. Overall, with so many other excellent historical nonfictions available to dive into, The American Lion can easily be passed over.

Happy Happy Birthday to our sweet Quinn! 💚 I can’t believe she entered our lives a full year ago. We love watching her learn and grow every day!
Today Quinn discovered the garden. Working in the garden is quite a bit less productive than it used to be but so much more entertaining. 💚
First 10k since having Quinn! It was a beautiful day to run the @riverbankrungr with Meghan. 💚
This past year might have been my favorite. Happy 7th Anniversary! 💚 Every year we take a photo in the same spot, except for #5 (Covid) and every year I can’t help but be thankful for how beautiful the gardens were on our wedding day.
Follow The Critiquing Chemist on WordPress.com