The Gene by Siddhartha Mukherjee 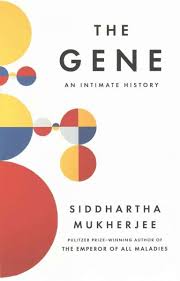 Overview (No Spoilers): The Gene is an insightful, organized and highly detailed history of the gene that will be a delightful read for everyone, regardless of having a scientific background. Mukherjee weaves a tale that is quite personal, having several relatives suffering from schizophrenia, along side the slow scientific development regarding solving and understanding the source of heredity. Mukherjee skillfully takes the reader through many complicated experiments and the importance of their results without ignoring the science behind the findings. I chose to listen to The Gene by audiobook, however an actual physical read of this book might have been better suited to the text. I had to mentally focus on what I was listening to because every sentence was important, similarly to a scientific article. If I, as the reader, happened to mentally drift off while listening to a section I frequently had to rewind to make sure I truly captured what was happening. Also, if the concept being portrayed was complex, I would have to listen to the same passage two or three times to fully grasp what was being said. I might have even listened to one section close to 10 times during an especially distracted moment. Mukherjee takes the reader through the political and historical impact of genes, specifically field of eugenics that swept the world, including the United States. Eugenics was most infamously employed by the Nazis prior to and during WW2, resulting in the horrifying  murder of millions that didn’t fit their perfect genetic mold. Additionally, Mukherjee added valuable personal insight into what may lay ahead for mankind as we continually learn more and are able to manipulate our own genes. The Gene was a wonderful read that enlightens the reader regarding a complex scientific topic that could easily become a political firestorm in the near future.