The Monster of Florence by Douglas Preston and Mario Spezi 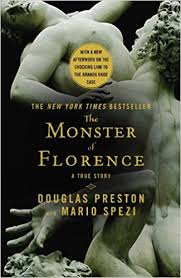 Overview: In mid August I made the literary acquaintance of Douglas Preston in The Lost City of the Monkey God. Having thoroughly enjoyed this wide spanning modern jungle adventure, I eagerly jumped at the opportunity to read The Monster of Florence, especially with glowing recommendations from Matt Ries and the Bunnie Bleaux. To be frank, my expectations were bordering on slim as I had thought I was embarking on a stereotypical murder mystery. As often happens with preconceived notions, they fell far off base with The Monster of Florence containing more mystery, intrigue, and politics than I possibly could have foreseen. In a time that the cases of Adnan (Serial Podcast) and the Steven Avery (Netflix) have captivated the American public, I’m quite surprised that this Italian serial murderer case has yet to garner the same attention. Preston and Spezi weave a tale that seems beyond the fabric of reality, especially as they find themselves at the focus of ongoing investigations. The Monster of Florence sets the stage by first highlighting, in somewhat cringe worthy details, the heinous murders and the initial blunder laden investigations. Falling prey to political ambitions and public pressures the investigators eventually delve into speculation and motives that seem stolen right from the synopsis of a crime novel as they dabble with the occult and wide ranging conspiracy theories. In threads that invoked additional feelings of déjà vu and mounting concern, with regard to current politics, was the importance placed on ‘fake news’ by key officials in the investigation, specifically a psychic. As someone who innately sees only the good in people and suspects only the most ethical sound intensions, I struggle when reading stories like this where individuals in placed in positions of power are morally compromised. On a side note, I’m rather jealous of Preston’s adventure filled gallivants that read more like modern day explorer novels. Overall, if you’ve recently found yourself swept into the hype surrounding the recent Adnan or Avery craze, than you’ll love The Monster of Florence, which contains many and more of the elements that caught the public attention of the aforementioned cases.

I hope you all enjoy Quinn’s smile in her school photos as much as we did. 💚
Holding tight to the end of summer! 💚
Don’t be distracted by the cute smiles. Yes, that is Q standing on top of her water table.
Quinn’s first time voting was apparently a somber affair.
Follow The Critiquing Chemist on WordPress.com