Samuel and Kara are married! Those who frequent my blog will remember my baby brother and his now wife, guest posting their travel adventures on the Critiquing Chemist from their 24 hours in China to an Australian road trip. They are avid travel lovers, even hiking to Machu Picchu with us last April. Last week they finally tied the knot and we couldn’t be more excited to have Kara officially part of our family, even though she has been a sister years now. After that short preface, it should be no surprise that for their bachelorette and bachelor parties Samuel and Kara picked out the fantastic travel destinations of Cancun and Punta Cana, respectively.

Leading up to our trip in the Dominican Republic, was a deluge of headlines regarding the tragic and suspicious deaths and events occurring to unfortunate tourists within this key travel destination. It is only natural that these stories results in concern, especially when the resort we’d booked months ago turned out to the exact one where a woman had been severely beaten over the past winter. Being a typical analytical chemist I dove into the statistics of tourism within the  Dominican Republic and how that would translate to me as a traveler. In short, there are approximately 6 million tourists that visit the Dominican Republic each year, with 2.7 million of them being American. That equates to approximately over 7,000 travelers from America alone arriving every day. After assessing those numbers I grew very comfortable with continuing with our trip and would promptly recite those numbers to any naysayer I interacted with who invariably would state something along the lines of “I can’t believe you’re still going to the Dominican Republic. Haven’t you read the news?” My poor cousin had the worst interaction when a coworker’s husband told her she was a “f*cking idiot” for not canceling. I’m positive my cousin handed the negativity with more grace that I could have managed, as I grew quite heated when she told me of the uninformed, rude comment. There was a second factor to keep in mind other than the statistics, with regard to the impact of the news and the internet. Leading up to our trip, I’d been frequently Googling the Dominican Republic, as a result, due to the mystical algorithms of the internet, every news site I went to would highlight every unsavory new headline relating to this particular country. The effect made it seem like something terrible and out of the norm was occuring every day in the DR, despite assurances from the State Department indicating the contrary. As a whole, I felt confident in our decision and looked forward to our trip. And let me tell you, it was a positively fantastic time!

After initially looking into the various options, we booked our flights and resort, the Majestic Elegance, through Priceline. The timeline we’d settled on had a long weekend planned, flying out Thursday and coming back Sunday afternoon. As I’d never stayed at an all inclusive resort before, I was looking forward to the experience, as many of my friends had raved about their all-inclusives during honeymoons, babymoons, and such.

When initially looking into traveling to the Dominican Republic, I became confused when encountering fellow travelers recommending you needed to bring $10 to buy a tourist card at the customs counter. This practice is no longer applicable though, as of April 25, 2018 the tourist card fee is included in your plane ticket to the DR. The Customs process in general went smoothly, albeit long due to several planes landing at approximately the same time. There are VIP services you can buy that allow you to bypass the long lines that are notorious for Punta Cana’s airport, however you will have to weigh if the added cost is worth the time saved.

Once we made our way through customs we met our driver from Renny Travel right out side of the terminal. Again, from initial research prior to the trip, we found it was fairly common to schedule transportation to your resort, which is approximately 30 minutes from the airport ahead of time. There were plenty of excellent recommendations online for various companies offering comparable services and prices, however we ended up choosing Renny Travel due to finding their name in a positive context in several locations ranging from blogs and forums, to Trip Advisor.

Arriving at the Majestic Elegance’s stunning open air registration desk, we were greeted at the shuttle door with cool towels and the resort’s refreshing signature frozen drink tasting like a dreamcicle. Check-in itself wasn’t necessarily as smooth as it could have been, especially after a long day of travel. We had thought we were in the adults only Majestic Elegance Club but apparently we had purchased rooms in the Family area. To upgrade, it was initially going to be $200/room or $100/person. The upgrade would give us the following benefits: 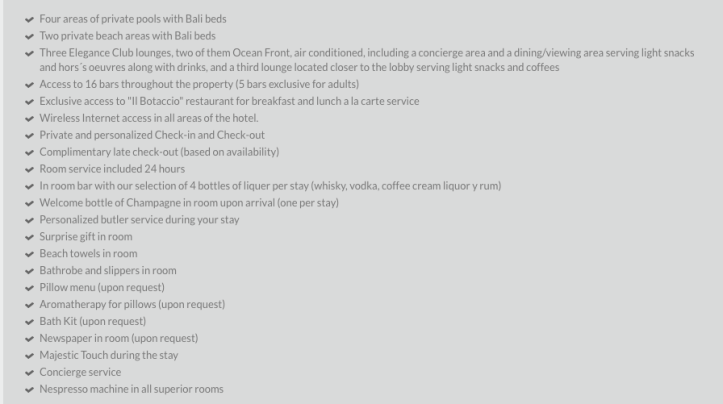 After the pitch by the Majestic desk worker, we took a quick timeout, where we huddled up to discuss if this upgrade was worth pursuing. Upon coming back to the front desk, we were offered a new deal of $50/person, cash only. Sure, it sounded a bit shady, and we could have quibbled a bit more but we agreed and were ushered to a new air conditioned room where we were given new bracelets to indicate our upgraded status. In hindsight, the upgrade was likely not worth it based on our personal experience where the Majestic Elegance was almost empty feeling. Had it been when the resort was packed, the upgrade would have been absolutely worthwhile. That being said, we by no means regretted our choice as our butler was fantastic and we enjoyed the amenities that we had due to the upgrade. Back to the adventure at hand, about fifteen minutes later, we met our butler Anthonio who escorted us to our rooms, while giving us a tour to acclimate us to the sprawling complex. 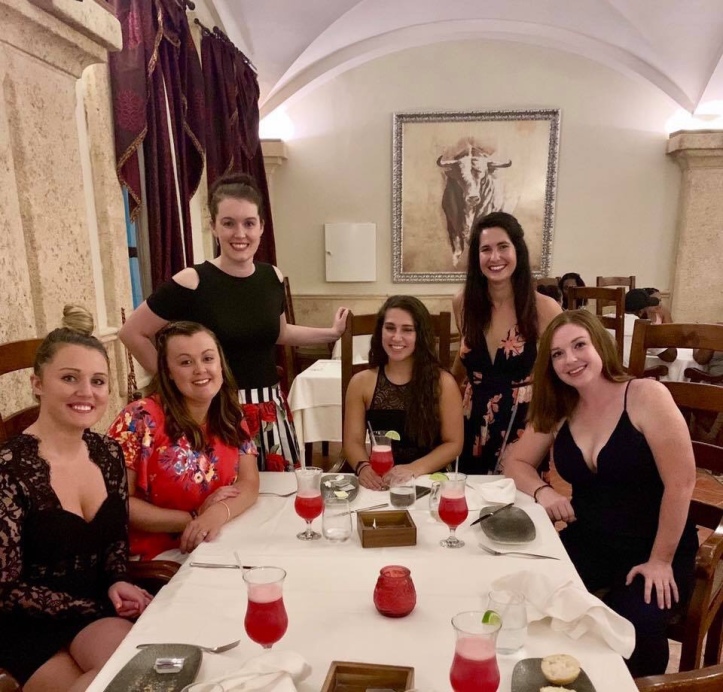 Borderline hangry from our long flight, we got dressed to head for dinner at the Asadito Steakhouse. The food was delicious and the service was so very welcoming with our waiters really making us feel like we were at home. We ended up seeing these waiters throughout the rest of our trip and each time they knew our names!

Based on the recommendation by the servers, we headed over the the Coco’s Nightclub where we danced the night away and met Janeen and her family, who were here for her Uncle’s vow renewal. After a long night of chatting we all had invitations to their wedding on Saturday.

Friday morning we decided to have breakfast at the Il Botaccio, which was only open to the upgraded Club members. The food was delicious and just what we were looking for in lieu of a buffet, however we were the ONLY guests in the restaurant. This was our first inkling that the resort might be on the empty side with regard to occupancy. Throughout this trip, having the resort to ourselves became a regular occurrence.  After breakfast, we jumped in our swimming suits and rushed to Bavaro Beach to take in the ocean. The seaweed issue was evident making the sand and water appear dirtier than expected, however this didn’t keep us from cooling off in the salty waves. Just after we’d settled we were approached with a man and several parrots providing photo opportunities. The photos were fun and turned out great! But after finishing our mini photoshoot every five minutes someone new was approaching us sell a wide array of items. As at breakfast, we basically had the beach to ourselves, which we’d again found surprising. Too soon we had to leave the beach to get ready to for our snorkeling excursion.

As should be expected, Lindsey and I overanalyzed and researched the various excursion opportunities before setting on Catamaran Tours Punta Cana Hispaniola. It can be a bit confusing because there appears to be the same company/website under various names but they all had great reviews so we easily settled on this excursion, especially after chatting with them on the phone. For approximately four hours we would be taken by boat to three different locations, Cabeza de Toro reef to snorkel, a deserted beach, and a sandbar, with dinner cooked on the boat. We chose to have the semiprivate option, which could have up to 25 total people on the boat, and we were so thankful we did because we ended up with such a fun group of people. The excursion company provided a photographer to accompany you and Jonathan took such amazing photos of our experience. The excursion started by picking you up at your resort before taking you to the docks. Upon getting shuttled to your boat, the drinks started flowing, and we were on our way to the snorkeling portion of the trip!

This was my first time truly snorkeling and I understand now why people love this activity so much! The variety of wildlife and the fish swimming all around you was continually fascinating. 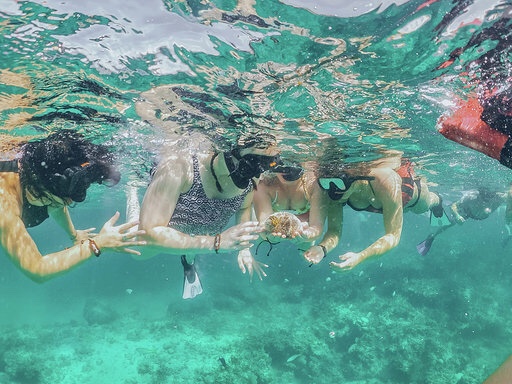 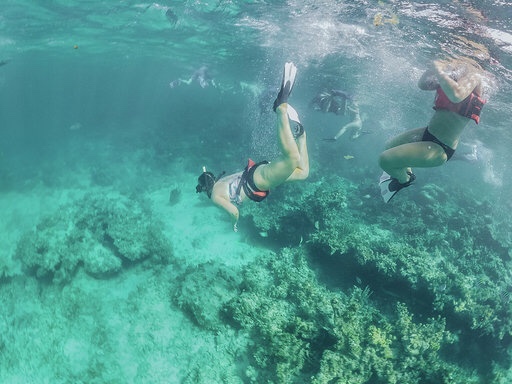 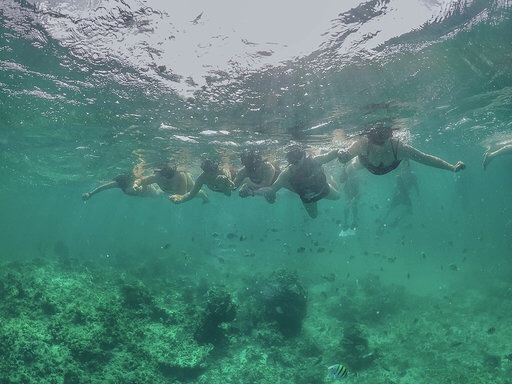 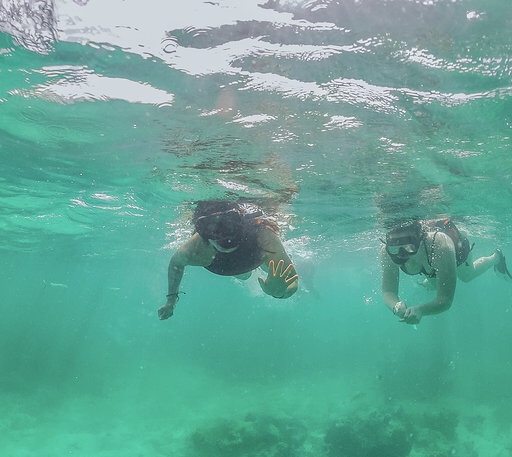 The next stop was the beach along a deserted beach where we had coconuts opened by machete right in front of us and delicious coconut water/rum drinks prepped. Too soon we were moving on to the sandbar, which again was another relaxing time full of laughter! We were all famished by the time the food was ready and it was quite tasty. They had several options to choose from, but I believe we all ended up picking the surf and turf. By the time we got back to land and the shuttle started dropping off the different  groups at their resorts, many hugs were given along with contact information. We would highly recommend this tour to anyone in traveling to Punta Cana.

Post tour, we got reservations at 9 Doors where again we were the only guests in the typically packed restaurant. After we got back from our trip it was actually announce that the Majestic Elegance was closing until November for remodeling due to the thousands of cancelations. We basically had the resort totally to ourselves the whole trip and had a wonderful time, but I can’t help but wonder how the trip would have been different under normal occupancy.

The next morning we ended up at the See & Sea, a buffet overlooking the beach, before we headed to private pool bar near our rooms. We spent many leisurely hours floating in the pool with Dennis, the bartender, keeping our drinks full.  We’d debated on bringing our own floats, but there were plenty floaties left by the previous guests for us to enjoy. 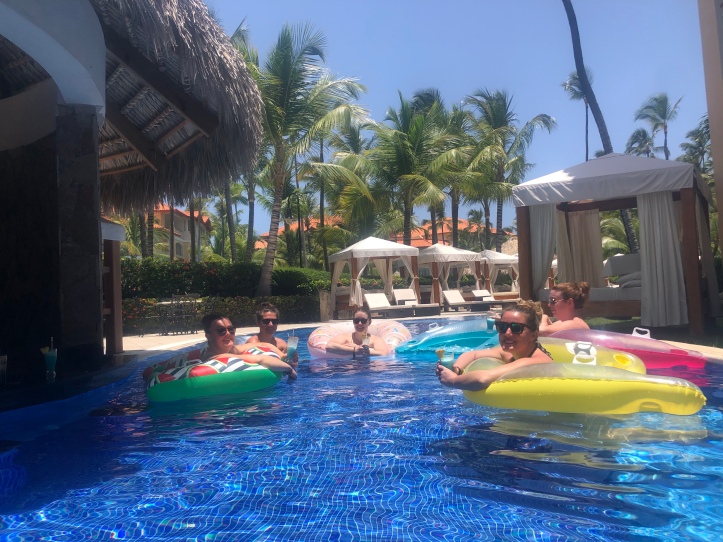 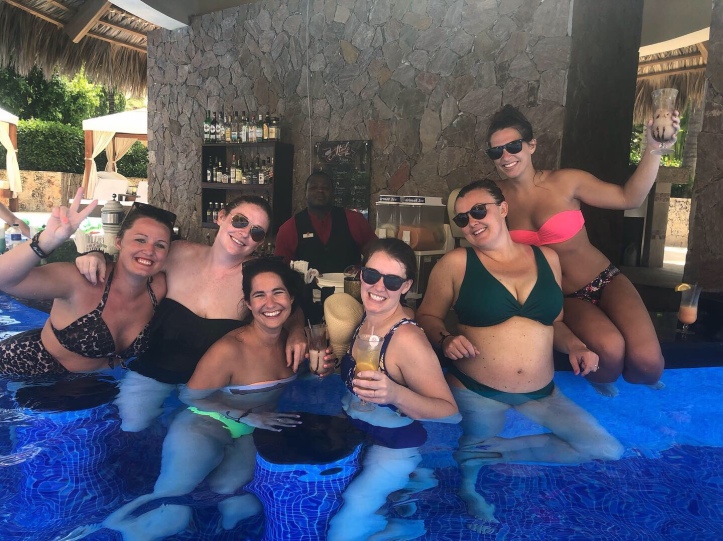 With time having positively flown by we had to hurry to get around for the wedding! We’d been invited every time we’d encountered one of the family members who we first met on Thursday night in the hallways, at breakfast, dinner, etc. So we attended the beautiful vow renewal before heading to dinner. 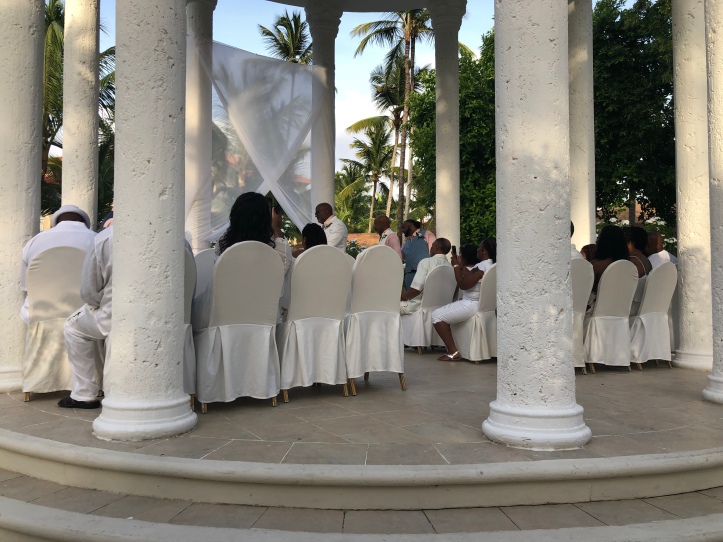 Our last dinner was back at the See & Sea based on what was open at the time. We had a wonderful evening as many of our favorite waiters were working, especially Junior! We ended the night on the beach watching a thunderstorm far out to sea. 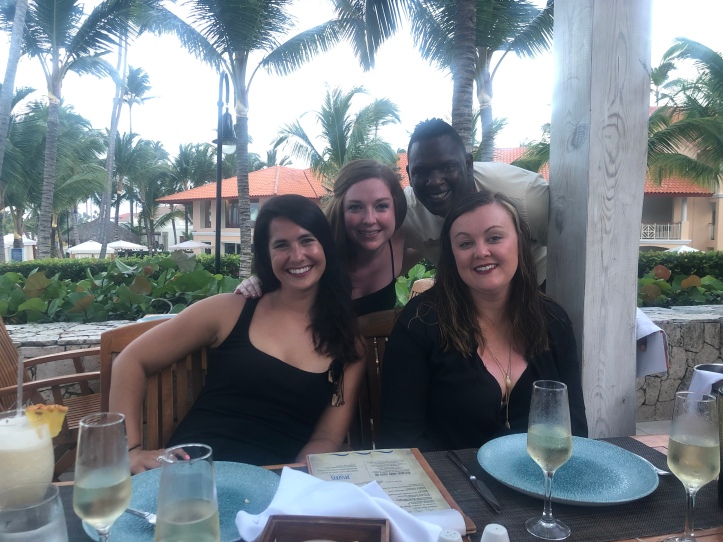 This was a wonderful bachelorette party celebrating Kara, especially in such a beautiful location! I was thoroughly impressed with the staff and the Majestic Elegance in general, completely understanding why guests come back here year after year.