The Blinding Knife by Brent Weeks 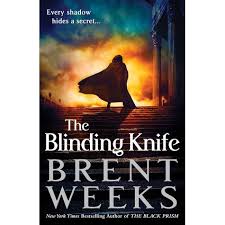 I’m currently midway through approximately half a dozen series, however after finishing The Blinding Knife, I can easily place The Lightbringer series at the top of the aforementioned list. This series contains all of the elements I enjoy in fantasy literature from detailed and expansive world building to complex, multidimensional characters. Not to mention an intriguing magic source that is uniquely simple at its core but vastly complex in application. Weeks meticulously layered a solid foundation in The Black Prism that allowed him to continue to expand upon by further developing and evolving this literary realm throughout book two. Weeks added depth to established character, while simultaneously introducing new names to the cast of The Blinding Knife. Much to my excitement, significant time was spent within the Chromeria, where we were treated to both a taste of the politics and educational curriculum. Additionally, the further reaches within the realm of the Seven Satrapies were visited, thereby touching on the complicated history surrounding these reluctant allies. Overall, despite a hiccup three fourths of the way through this novel that involved much uncomfortable, but perhaps necessary (still deciding), drama I positively loved this read and couldn’t put it down. With the groundwork established by the first two books, I can’t wait to find out what Weeks has in store for the rest of this series.

Happy Happy Birthday to our sweet Quinn! 💚 I can’t believe she entered our lives a full year ago. We love watching her learn and grow every day!
Today Quinn discovered the garden. Working in the garden is quite a bit less productive than it used to be but so much more entertaining. 💚
First 10k since having Quinn! It was a beautiful day to run the @riverbankrungr with Meghan. 💚
This past year might have been my favorite. Happy 7th Anniversary! 💚 Every year we take a photo in the same spot, except for #5 (Covid) and every year I can’t help but be thankful for how beautiful the gardens were on our wedding day.
Follow The Critiquing Chemist on WordPress.com