The Last Wish by Andrzej Sapkowski 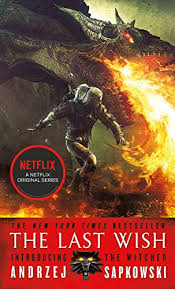 I’d originally approached reading The Witcher series as one typically would in order of publishing date with having read The Blood of Elves first. Interestingly, the leading advice I received after my review was to ignore the conventional reasoning behind reading order, instead read them in chronological order of the plot. Taking heed of my fellow readers urging, I next picked up The Last Wish based on this recommendation and will likely now have to reread The Blood of Elves in its proper place within the story as I’m sure I’ll take more away from this already fantastic novel. The Last Wish contained a series of short stories that drew me ever deeper into this magical literary realm by weaving into the fold already familiar childhood fairy tales, albeit, with much darker twists. Examples off the top of my head were references to Cinderella, the Troll under the Bridge, Rapunzel, and Beauty and the Beast to name a few. Perhaps it is introducing bias into my review but due to the Netflix show and The Blood of Elves, I’ve already come to enjoy Geralt as a character so I struggled to really gauge the extent of his character development within The Last Wish as a stand alone, introductory novel. A few of these tales highlighted in The Last Wish showed up in the Netflix TV show and despite the outcome of some close calls being spoiled I loved seeing these scenes come to life in print, which often affords details or insight often lost in the media of TV. Really, both mediums complimented each other well by offering unique perspectives that were fun to  both watch and read.