Nothing to Envy: Ordinary Lives in North Korea by Barbara Demick 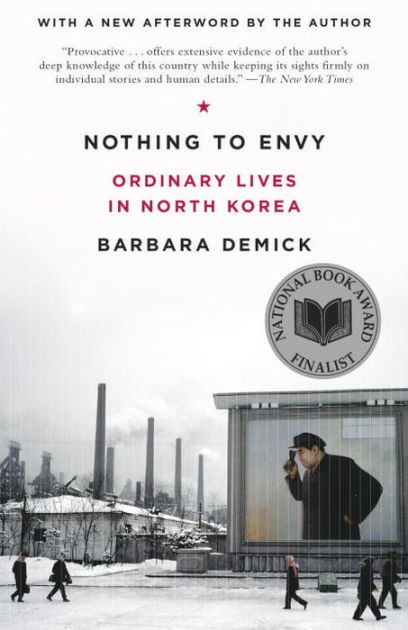 I’ve been chewing through some lengthy fiction lately and gearing up for a healthy helping of fantasy in the SPFBO contest, so I knew it was time for some non-fiction in my book diet.  Enter Nothing to Envy: Ordinary Lives in North Korea written by award-winning journalist, Barbara Demick.  In the early 2000s, Ms. Demick was living in Seoul, South Korea reporting for the L.A. Times when she began interviewing six North Korean defectors with intertwining stories.  At the time, North Korea was recovering from a devastating famine lasting throughout the 1990s (a famine which may have killed up to 20 percent of the population), and the trickle of defectors was turning into a stream. Weaving their personal histories together, along with historical background of the secretive totalitarian state, Demick gives readers a fascinating look into North Korea that has the pull of a car wreck: horrific but impossible to look away.

Demick details the lives of North Koreans at different levels of the strict caste system: the core, wavering, and hostile classes.  For North Koreans and their children, these castes determine every aspect of their lives: education, job opportunities, marriage prospects, housing, access to food, and level of government surveillance to which they are subjected.  For many of us who’ve watched the overdramatized North Korean propaganda films or the posturing of the almost cartoonish Kim Jong-un, it’s hard to fathom how an entire population can be brainwashed into believing that a totalitarian dictatorship is the best way of life (let alone an acceptable one).  But Demick describes the systemic indoctrination built into every level of North Korean society through the experiences of her interviewees, bringing readers deep into their world of neighborhood spies, government restrictions, and the herd mentality fostered in the state.

By focusing on the human stories of several individuals, Demick is able to flesh out a bleak picture of the psychological manipulation, economic hardship, and dehumanization suffered by the people of North Korea in a way that is both riveting and informative.   It’s hard not to feel despair as Doctor Kim runs out of medicine for her patients, delivering IV fluids in empty beer bottles, or when Mi-ran struggles to sing communist party songs with her kindergarten students, despondent and dying of starvation.  Each of the character’s stories vividly bring the devastation to life in a way that statistics about North Korea’s GDP, forced labor population, and famine victims simply do not.

One particularly interesting aspect of the book was Demick’s exploration of South Korea anxiety about a future reunification of the Korean Penninsula.  Once a nation with a relatively homogenous culture, the gulf between the technologically advanced, democratic South Koreans and the frozen-in-time, totalitarian North Koreans grows every year.  The cost of integrating North Koreans into South Korean society is in the billions, and possibly exponentially more.  Even resettling the relatively small number of North Korean defectors each year requires substantial resources, involving background interviews, months at education centers to teach North Koreans how to function in society, and financial assistance for the first year.  Even with this assistance, many defectors face psychological and financial challenges as they navigate their brand new world.

Perhaps more than anything, I came away from this book with an overwhelming sense of how the fates of people born at the same time but in different places can differ enormously, and furthermore, that, as global citizens, we have a responsibility to do what we can to help those trapped in oppressive circumstances.  The first step in this responsibility is to educate ourselves, and Nothing to Envy is a great place to start.

Pellagra: a disease marked by dermatitis, gastrointestinal disorders, and mental disturbances and associated with a diet deficient in niacin  (this word popped up in the last TWO books I’ve read, so I had to add it… both authors described it as a rash associated with starvation)