A Knight of the Seven Kingdoms by George R. R. Martin 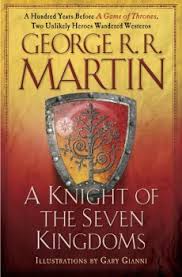 Overview (No Spoilers): Well it is 7:16 A.M. on Christmas Eve, the presents are wrapped, there’s a cake baking and I’ve already been to the gym. What ever should I do to kill time? None other than try to catch up on my blog since I’m approximately five books behind! A few weeks ago I finished listening to A Knight of the Seven Kingdoms, on audio. I was initially rather annoyed (as I’m sure many GOT fans were) that George was putting pen to paper for anything other than the next book in the Ice and Fire series, however A Knight of the Seven Kingdoms, was delightful. The story follows the adventures of the chivalrous hedge knight, Dunk and his squire, Egg, who’s turn out to have important roles in the future of the Seven Kingdoms, however at this stage, Dunk is bumbling and naïve, and Egg is a pompous prince, with a lot to learn about sleeping on the ground and common folk. At first I has assumed this novel was meant to be a children’s book based on the difference in writing style from the GOT series, alas, I realized my error upon one of the characters exclaiming a certain expletive rhyming with duck. The book enlightened fans of the Seven Kingdoms of the daily life surrounding knights, their squires, and minor lords of the realm. Overall, A Knight of the Seven Kingdoms offered a welcome glimpse back into one of my favorite literary worlds while I eagerly anticipate the next, long awaited novel from George R. R. Martin.