Shatter Me by Tehereh Mafi 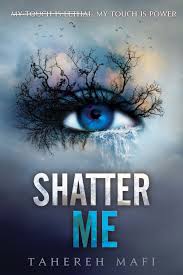 Shatter Me had honestly so much potential! The setting is yet another dystopian novel, however it has elements containing what I’m going to call ‘mutants,’ or in other words humans with powers. Therefore, this book is going to be right up my alley, or so I thought. In the beginning I was hooked, Juliette’s life as a prisoner was disrupted by the arrival of a roommate and subsequently her change of confined environment. After being locked away and abandoned by her family, for almost a year, the text mirrored her fragile state of mind brilliantly. As she became more acclimated to the situation and the presence of other people, her mental state returned, thus the writing returned to a less frenzied state. With the government wishing to utilize her dangerous and isolating ability as a weapon, she finds an unlikely ally in an unexpected place. And this is where my frustration with the author begins to take hold. After ingeniously setting up the world in which Juliette lives in and her abilities, the story falls apart into a teenage love story where the two individuals are attracted like magnets, despite the danger at hand. Anyway, a daring and improbable escape happens, before an even more impossible escape, and believe it or not a third daring dash, with mixes of hot and heavy make out sessions sprinkled throughout. The book ends on a high note with Juliette discovering she is not alone with her abilities, with a whole community of mutants existing to fight the current tyrannical government. Overall, the mutant dynamic is the only aspect keeping this series afloat for me, however my hopes are low at best.

We had the most magical time in Wadi Rum staying at the unearthly, elegant Memories Aicha Luxury Camp. Between the delicious meals and amazing stargazing excursion this unique camp was easily our favorite place we’ve ever stayed.
Eight hundred steps, dodging donkeys and Samuel getting cursed = successful day two at Petra hiking to the Monastery! #petra #💚petra #themonestary #jordan #adventureenthusiasts #hiking #adventure
Channeling our inner Indiana Jones at Petra! 💚 . . . . . #Petra #jordan #adventurenthusiasts #blogger #blog #travel #bucketlist #indianajones #photography
While cleaning out my childhood room I stumbled across this note I must’ve tucked among my books for safe keeping during middle school or high school. Missing my Grandpa a bit extra today.
Follow The Critiquing Chemist on WordPress.com