A Winner’s Kiss by Marie Rutkoski 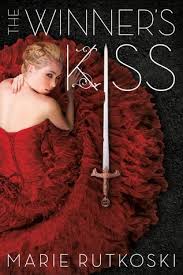 The Winner’s Kiss is the third and final installment of The Winner’s Trilogy, which I’ve promptly flown through. The series as a whole was staged in an artfully depicted and detailed world, that proceeded to grow with each subsequent book. Due to the ultimate cliffhanger that the preceding book had left the reader with, I dove right into this third book with high hopes and for 99.9% of the book was not disappointed. The well-developed characters continued their complex relationships and often influenced by their stubborn personalities, with often entertaining or eye-rolling events. However, at the end of the book there was so much left unresolved which seemed out of character for the series that had been exquisitely detailed up until this point. Overall, A Winner’s Kiss’ end seemed so abrupt I wanted to turn to page to see if Rutkoski has added an unseen Epilogue. I was disappointed that a series I’d thoroughly enjoyed immersing myself in was left so open ended.

Questions I am left with: