Queen of the Tearling by Erika Johansen 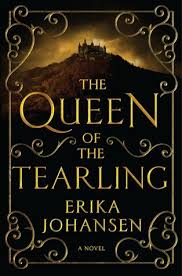 Initial Note: I had first read and reviewed The Queen of the Tearling over eight months ago and am still regularly recommending to anyone and everyone.  When my brother picked up the audiobook I decided to give this delightful novel a reread to see if I enjoyed it just as much the second time around.  Needless to say, I loved it even more the second time around and finished the audiobook in two days!  This book is an absolute must read!

Overview (No Spoilers): Yet again Kari recommends another truly captivating series. The Queen of the Tearling by Erika Johansen is the tale of a young girl, Kelsea, who is thrust into the role of Queen on her 19th Birthday. However, she must first survive the harrowing journey to her castle, assassins, and her traitorous Uncle Regent, all while trying to heal her fractured land. Johansen’s world appears to be postmodern, with vague references to America and libraries containing the works of Rowling, Tolkien and such. The history of this world is wrapped in secrets as Kelsea’s lessons on the aforementioned subject were heavily edited. This fog of mystery very slowly beginning to clear by the end of the book, however there are so many unknown pieces of the world that have yet to be revealed. Kelsea’s strong, pure personality soon manages to draw a crowd of loyal supporters to her side. Her world involves many complex countries, traditions and cultures, with emphasis on their resources and goods.  Kelsea also demonstrates magical abilities, shrouded in mystery, which offer the promise to only get more powerful. Overall, I’m so pleased to have found two series back-to-back that I’ve thoroughly enjoyed in Throne of Glass and The Queen of the Tearling. I’m looking forward to the point of impatience to reading the next book both series. There’s talk of a movie, with Emily Watson starting as Queen Kelsea. In personality she is the ideal fit, however I’m not sure if she is ‘plain’ enough to fully to portray sweet Kelsea due to this fact being emphasized throughout the book. Regardless, the concept is intriguing and I am curious as to the remaining cast. Perhaps the Hound would be an appropriate cast for Mace.

Safe to say I’m jealous of Luke and Izzy’s relationship. 💚
Our bees survived the winter! Between the warm weather and this happy news we are very much ready for spring! 🐝💚🐝💚🐝 #obriensbees #puremichigan #spring #bee #bees #beesofinstagram #beekeeping #beeblog #blogger #blog #nature
A surprise showed up on my doorstep this morning! 💚 I can’t get enough of these beautiful Red Rising editions from @subpress! @piercebrownofficial #redrising #irongold #books #bookstragram #critiquingchemist #booklover #bookblogger
As excited as we are to be home in wintery Michigan, we can’t help but miss Jordan’s warmer weather. Especially when reflecting back on our rainy morning snorkeling in the Red Sea!
Follow The Critiquing Chemist on WordPress.com