A Wizard’s Forge by A.M. Justice 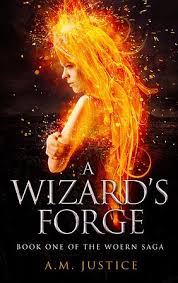 Overview (No Spoilers):  Though I read A Wizard’s Forge almost two weeks ago I have struggled writing this review despite thoroughly enjoying reading the majority of this book. Justice weaves a tale in which a highly intelligent young girl, Vic is suddenly ripped from the world that she knows just as she reaches her life long goal of becoming a Logkeeper, whereupon she finds herself a slave who is sold to Lornk. While she continues on to do amazing things and the story takes many twists and turns, throughout it is the reminder of the abuse received at the hands of Lornk, which remains a theme and impacts the characters throughout the remainder of this adventure. As a reader, the scenes with Lornk and Vic were difficult, if not painful to read, however, I do have to applaud Justice for writing about a subject that is often neglected, glossed over, or the repercussions overcome with minimal struggle in literature. Eventually, the storyline becomes one of revenge that seems to drag on without an immediate goal, challenging the patience of the reader. Overall, Justice created a unique and intriguing new literary world in A Wizard’s Forge that is filled with strong characters who continue to grow and evolve throughout the story. Readers will find themselves quickly drawn into the mystery surrounding this realm, which includes myths of space travel, magic, and strange creatures. Be forewarned, A Wizard’s Forge contains content and strong themes involving torture, sexual and psychological abuse, and although these scenes are tastefully detailed, they are still challenging to read.