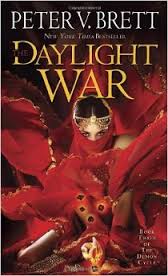 Overview (No Spoilers): A tell tale sign of a great book/series is when the subject matter finds its way into your subconscious, as such, let it be known I’ve been warding everything in my dreams for weeks now. The third book in The Demon Cycle series, The Daylight War fails to let off any steam as this series continues to get better and better with every subsequent book. In this third installment, the reader is introduced to the fascinating new point of view (POV) of Inevera, Jardir’s first wife and the key reason he is in the position of power that he currently holds. In previous books, Inevera’s mysterious character is viewed through the suspicious eyes of Jardir who becomes embittered toward her due to the control her fortune telling dice hold over his life, as well as, a key betrayal. Her chapters quickly become some of my favorite due to the revisiting of several important events viewed through her eyes, as such changing our perspective/feeling toward the said event. Quickly, any grievance I had associated with her character grew into understanding and in some cases sympathy. Another noteworthy aspect of Inevera’s chapters include an in depth look behind the veil of secrecy surrounding the dama’ting. Aside from this exciting POV, we see other familiar characters continue to grow and develop in new and surprising ways, e.g., Gared, Rojer, Renna, Arlen and Leesha. Amanvah, Inevera’s daughter quickly becomes another intriguingly complex character as she struggles to resolve the only world she has known within the confines of her family with that of the outside world. Throughout the book, all of the characters expand and test the limits of their unique gifts and powers as the nights of Waning draw close, whereupon they must fight for their lives against demon hordes like they’ve never before encountered. Overall, Brett hasn’t taken his foot off the gas in The Demon Cycle series with each book continually building and adding in complexity to the foundations laid by the preceding novels. This series is an absolute must read for any book lover that places special emphasis on world building and mind boggling levels of detail.

Quinn’s first time voting was apparently a somber affair.
An extra special Tuesday! This tough girl didn’t cry for either of her shots. 💪🏼👩🏻‍🔬
Happy summer vibes! 💚
I’ve always loved summertime, but Quinn’s joy makes it that much sweeter.💚
Follow The Critiquing Chemist on WordPress.com