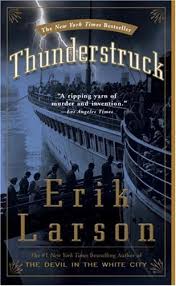 Overview (No Spoilers): Having now read four books by Erik Larson, I can officially say I’m an adoring fan. When reading nonfiction, I love being immersed in detail throughout the story, especially when it aligns in tandem with feeling as though I’ve significantly added to my knowledge base on the specific topic at hand.   Larson has accomplished this feat effortlessly in every book I’ve read thus far, e.g., Devil in the White City (a personal favorite), Dead Wake, In the Garden of Beasts, as he weaves together two seemingly unconnected stories, typically a scientific advancement with an isolated social event, ultimately building the stories up until they come to an inevitable head.  Taking place approximately at the turn of the 20th century, Thunderstruck highlights the innovation and challenges, both scientific and peer related that faced Guglielmo Marconi, the inventor of long distance wireless radio communication, that also coincided with the manhunt for the second most famous murderer in London behind Jack the Ripper. I was surprised when Larson revealed that the murderer, Hawley Harvey Crippen, was born and raised in Coldwater, Michigan, which is only 45 minutes from where I grew up. Larson went into fascinating detail about the history of Coldwater and named streets that I was familiar with as a kid. I have to laugh remembering when I was very young, I became very was puzzled regarding Coldwater and subsequently quizzed my Grandma as to why anyone would choose to live here due to the lack of hot water. Anyway, Crippen’s career path and disastrous love life are detailed alongside Marconi’s scientific experiments and social miscues, whereupon both men’s lives were following their own isolated paths until the most fortuitous incident, which culminated in their lives intersecting in a most unexpected way. Overall, I would recommend Thunderstruck to any detail loving reader that enjoys a nonfiction story that has all the unexpected elements and plot twists of seeming fiction.