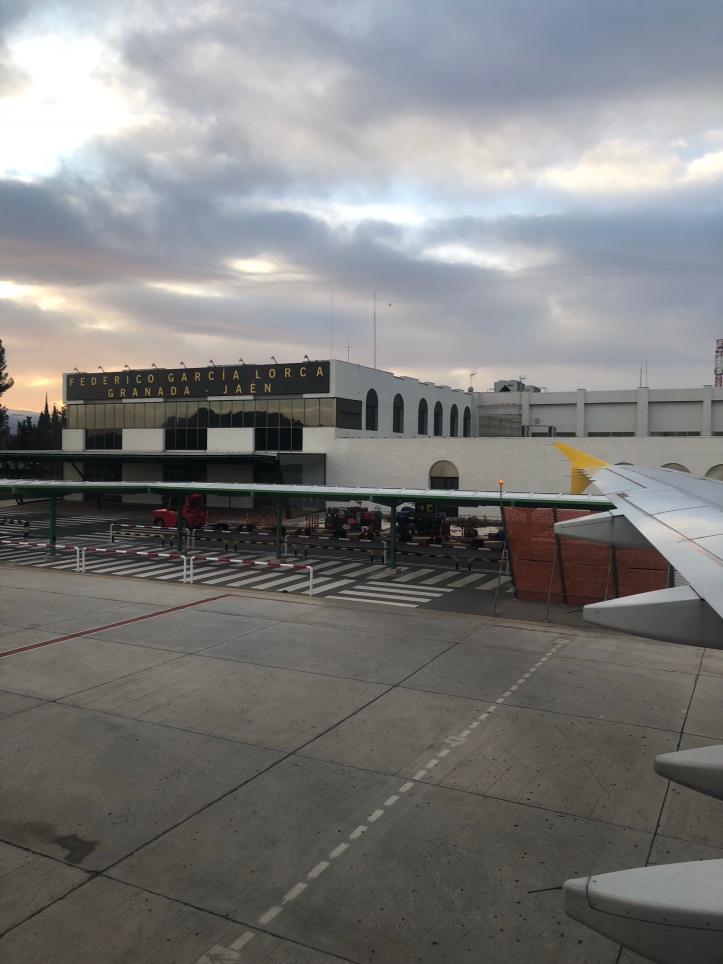 Hello fellow travelers! This post highlights our day in Granada following our Barcelona excursion.  After weighing the various options of traversing from Barcelona to Granada, we woke up so very early to catch a 7am flight to Granada. Despite the early morning, it was worth it for $56 to take approximately an hour and a half flight (Vueling Airlines) to arrive in Granada before 9am. To reach Old Town from the Federico García Lorca Granada-Jaén Airport we took the airport shuttle for just over 3 euros to the Gran Via stop. Once we found our way to our adorable Airbnb, hidden in the winding streets of Albayzin,  we decided to fuel up before tackling our busy, packed day in Granada.  Moreover, at this point we were in real danger of succumbing to the hangry stage.  Based on a recommendation from our host we had a delicious breakfast at Cafe 4 Gatos  that also afforded phenomenal views of Alhambra!

Once properly caffeinated and our hunger sated, we set out for our grand Granada adventure.  Of course this included setting out in the wrong direction, no fewer than three times, before we eventually found our way to Old Town to take Rick Steves‘ walking tour.

A reoccurring theme throughout both Granada and Sevilla was the frequency at which we would strike out in a certain direction, one of us beyond confident they were headed the correct way before finding out ten minutes later that we were actually walking the opposite direction. We never viewed this necessarily as a bad thing because so many times we would find some of our favorite restaurants or other hidden gems. In this way, we accidentally stumbled upon the Alcaiceria market which was heavily geared toward tourists, prior to finding the Granada Cathedral.

We saw many, many churches on our Spain adventure, however the Granada Cathedral has one of the most impressive facades we encountered.  These pictures fail to truly  grasp how overwhelmingly impressive this cathedral is as you approach it.  Due to our time crunch we didn’t tour this cathedral, choosing instead to continue exploring the city.  We did take the time to tour the Capilla Real (Royal Chapel), in which you’ll find the impressively ornate tombs of Ferdinand and Isabel. 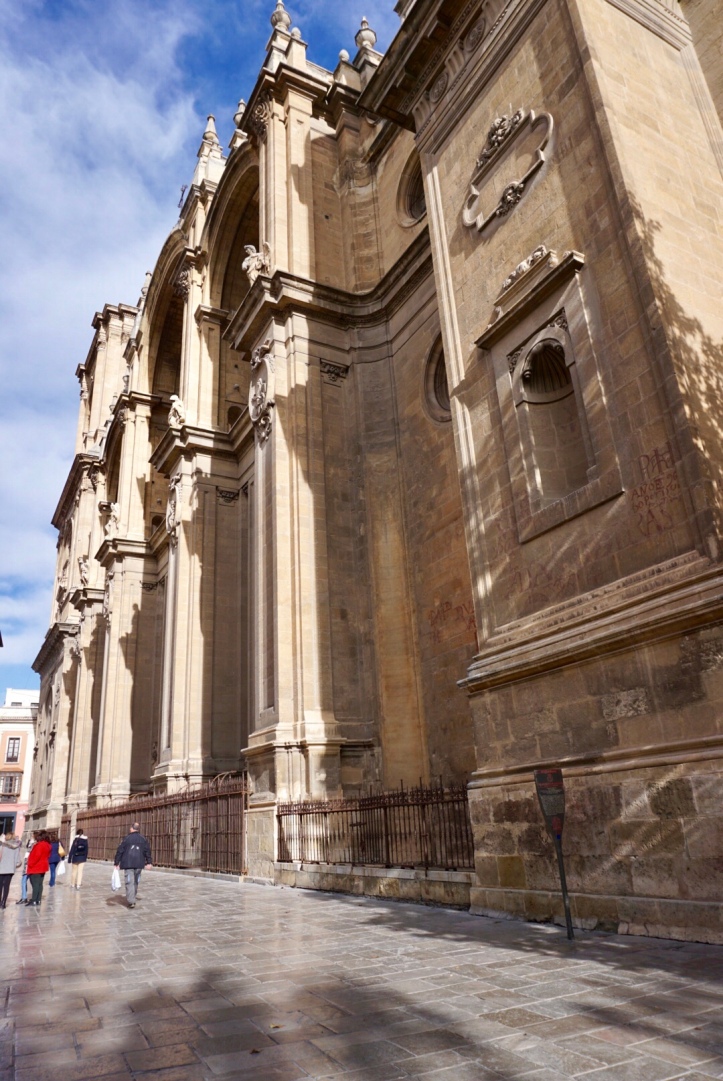 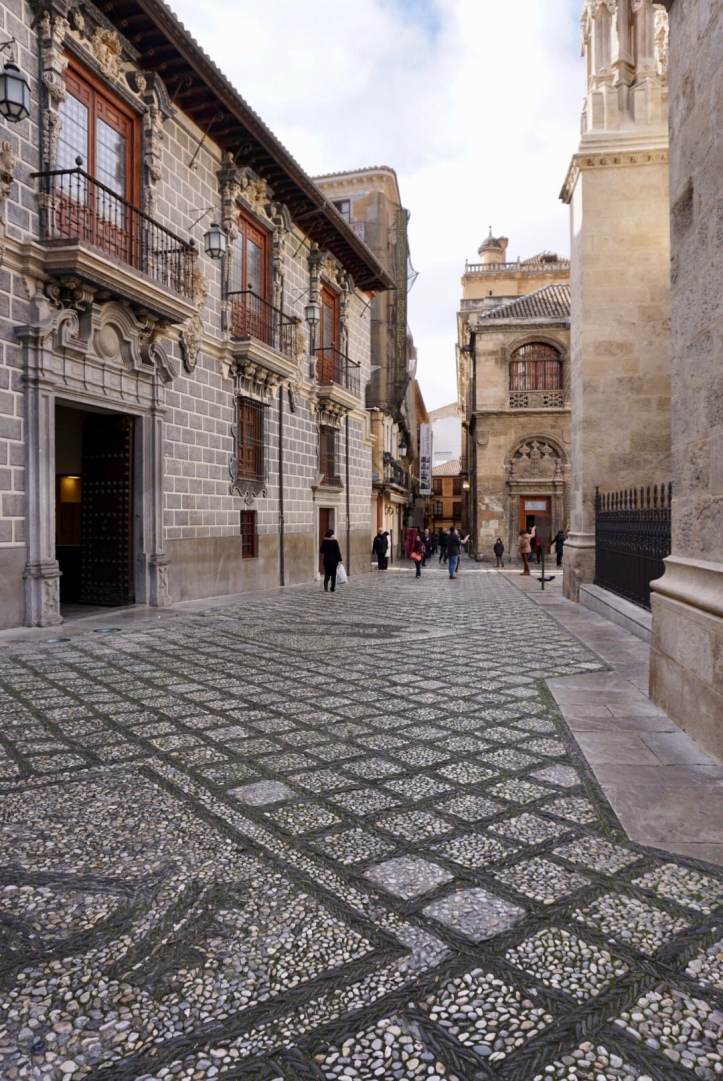 Resuming our Old Town Walk, we made our way to Plaza Nueva, where we continued our walk down the scenic Carrera del Darro. On this picturesque road we would frequently stop to peer down at the river to spot adorable wild cats (I think we spotted a total of four) or take a break to look up at the stunning views of Alhambra. Exploring Old Town per Rick Steves recommendation was easily one of our favorites of his self guided tours. 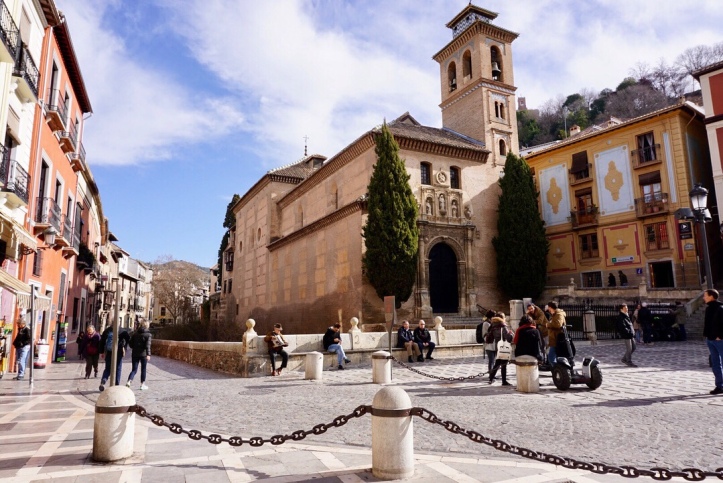 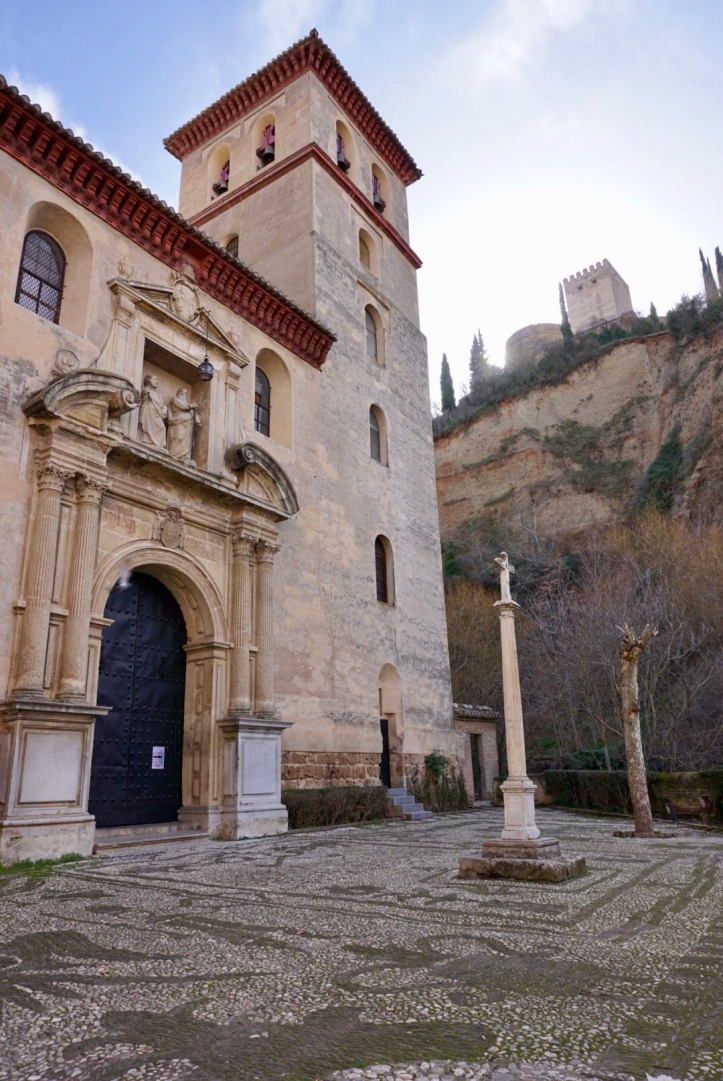 After Sarah and I came to the end of Carrera del  Darro we continued exploring along Cuesta del Chapiz in search of the Mirador Cruz de la Rauda viewpoint that was recommended by our Airbnb host.  Alas, we had to turn around before reaching the goal due to the risk of missing our time slot for Alhambra, but we stumbled upon the beautiful Archivo Historico Municipal de Granada. 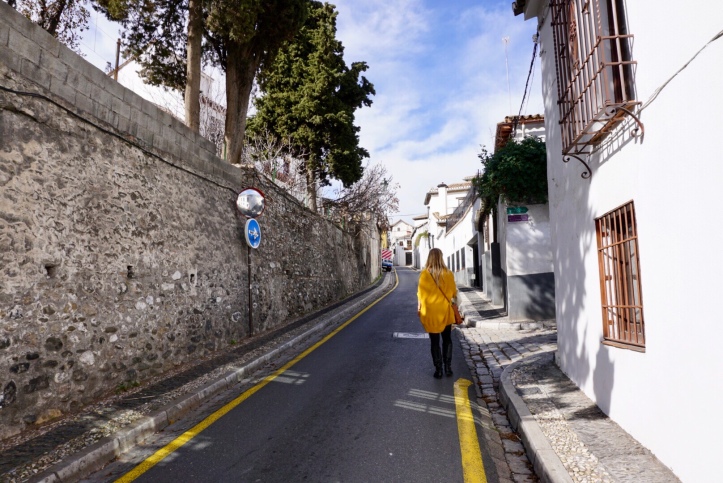 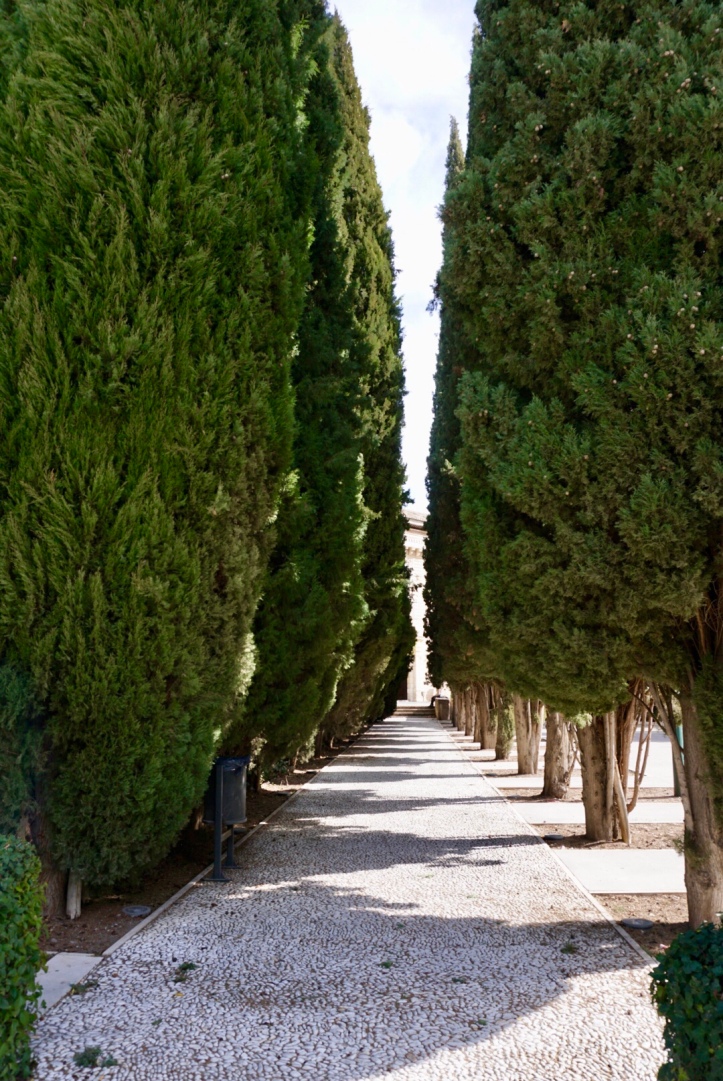 After abandoning our walk to Mirador Cruz de la Rauda, Sarah and I stopped for sangria and tapas to refuel before Alhambra. Granada has a wonderful tradition of bringing out a plate of tapas with a drink order.  Alhambra was easily my most anticipated tour of the trip and it far surpassed any of my expectations.  This palace complex can attract up to 8,000 visitors a day and it is recommended that tourists book their tickets up to three months in advance.  Alhambra consists of four sights within its expansive grounds, the Charles V’s Palace, Palacios Nazaries, Generalife Gardens, and Alcazba. We didn’t have time to explore the Charles V’s Palace that houses the Alhambra Museum. Instead, we took our time visiting the Palacios Nazaries, Generalife Gardens, and Alcazba. Due to visiting in the off season we were able to purchase our tickets approximately a week ahead of time, and upon chatting with fellow tourists, some people were purchased their tickets the day of.  In contrast to Rick Steve’s advice on only being able to acquire our ticket hardcopy in Spain, we were able to print off our tickets ahead of time, thus avoiding any needed kiosks or ticket booths.  Visitors select a half hour time slot with which to enter the Palacios Nazaries and entry is strictly enforces during that time frame, thus if you unfortunately miss your entry time you will miss my favorite part of our trip. To get up to Alhambra we took the #C3  red minibus from the Plaza de Isabel La Catolica for 1.30 euro and exited at the Justice Gate exit, which drops you off right by the Palacios Nazaries.  To enter this gate you need to already have your ticket hardcopy in hand, but it saved us so much walking, especially on an already tight schedule by taking this shortcut.

Palacios Nazaries was the last occupied Moorish royal palace in Spain, which was surrendered to the Christian Reconquista in 1492. Thankfully this palace has survived despite falling into disrepair. By far my favorite excursion of our trip, Palacios Nazaries greatly exceeded my already lofty expectations. Everywhere you looked there was a mind numbing level of  intricate detail from the columns to the ceilings.  I can only imagine what this palace must have looked like fully furnished and in its prime.  We were also grateful that based on the time of the year that we were visited, it didn’t feel as though there were many tour groups or hoards of people.  I’m sure this stunning sight has a very different feel with approximately 8,000 people visiting in peak season. 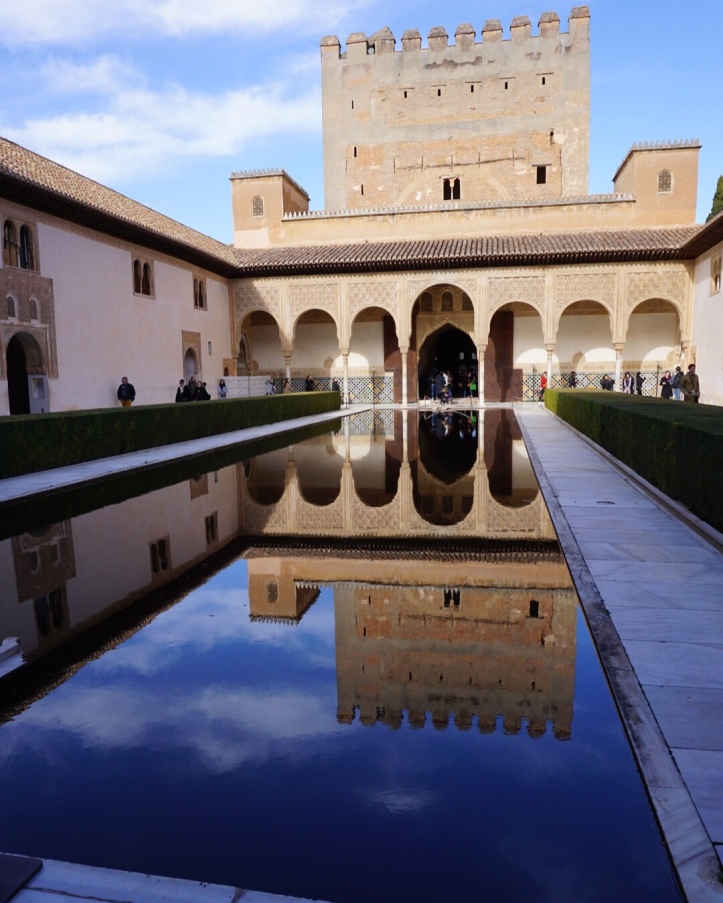 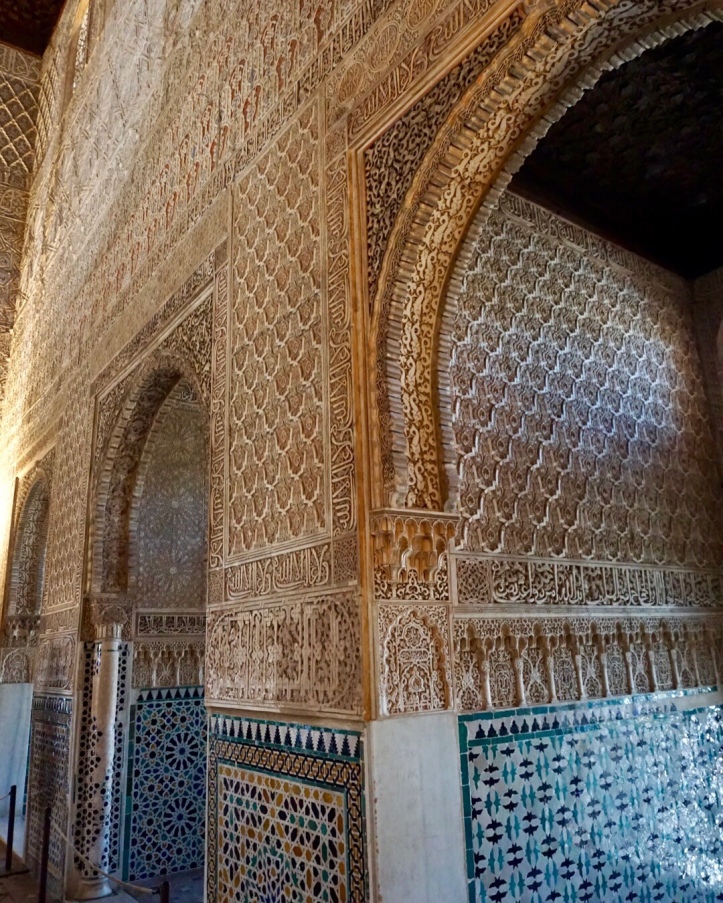 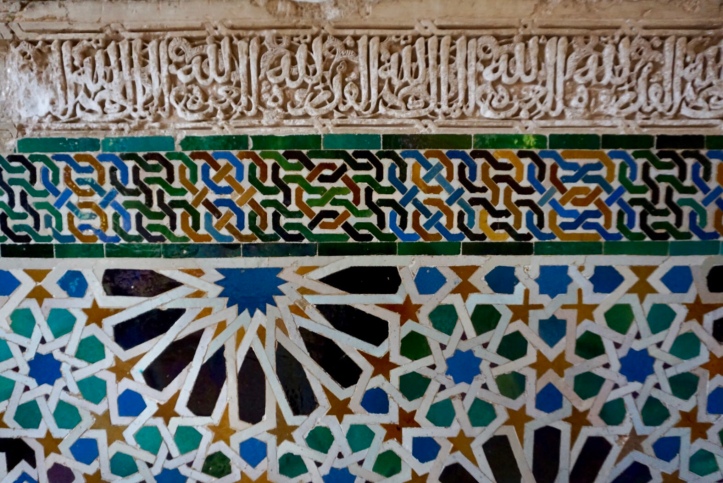 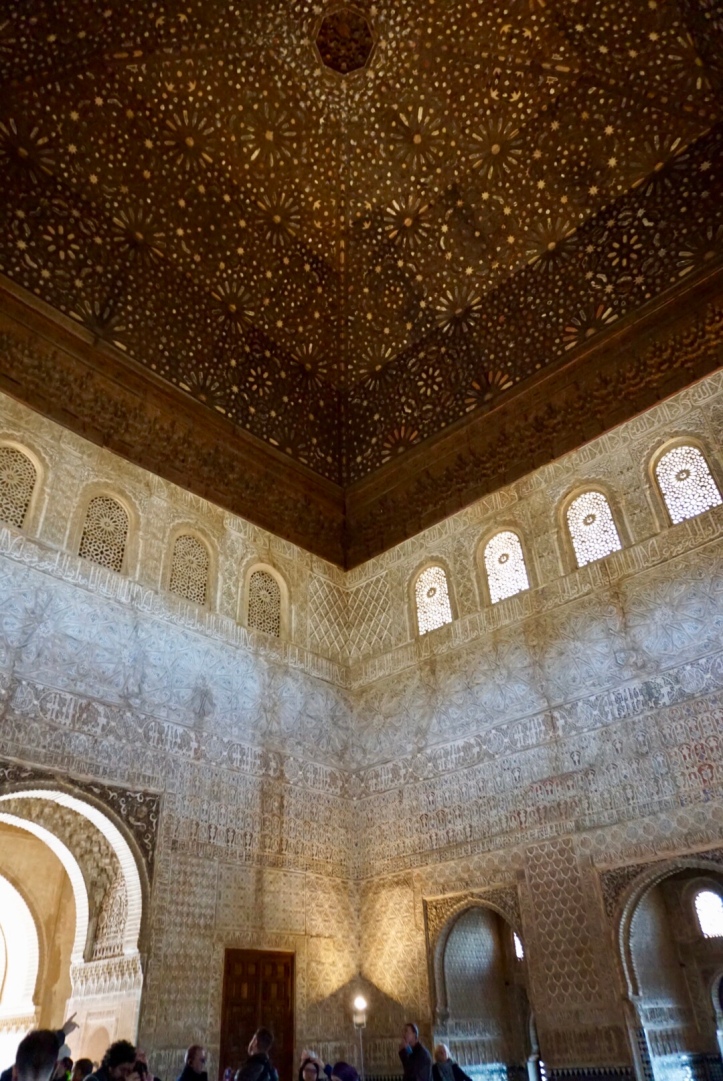 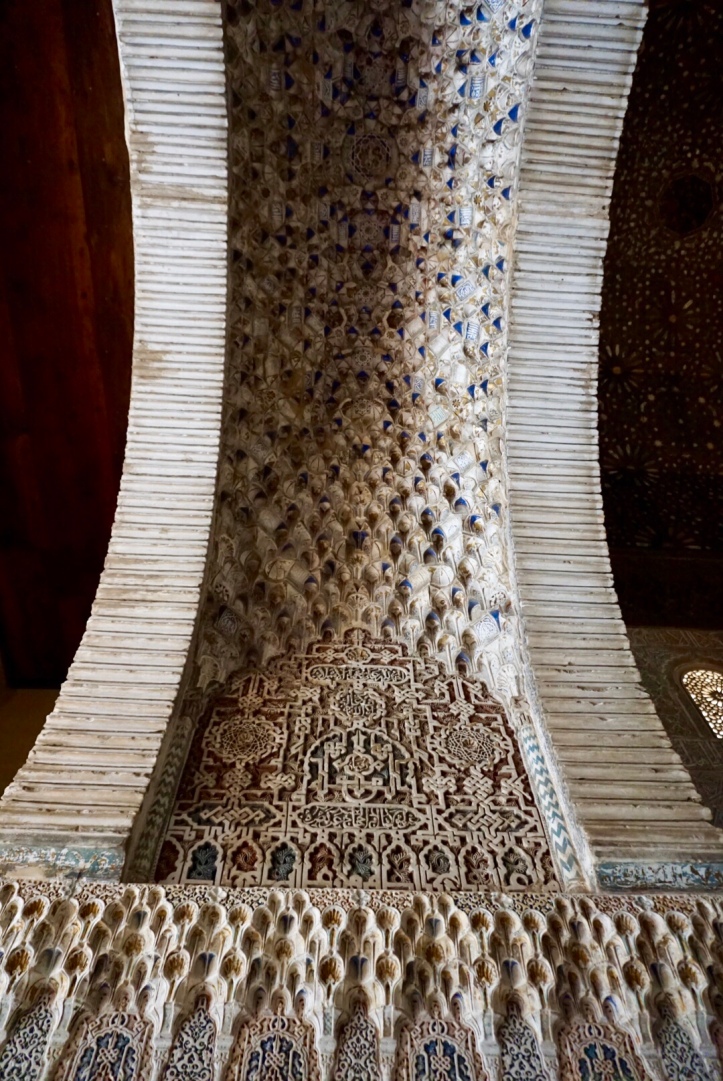 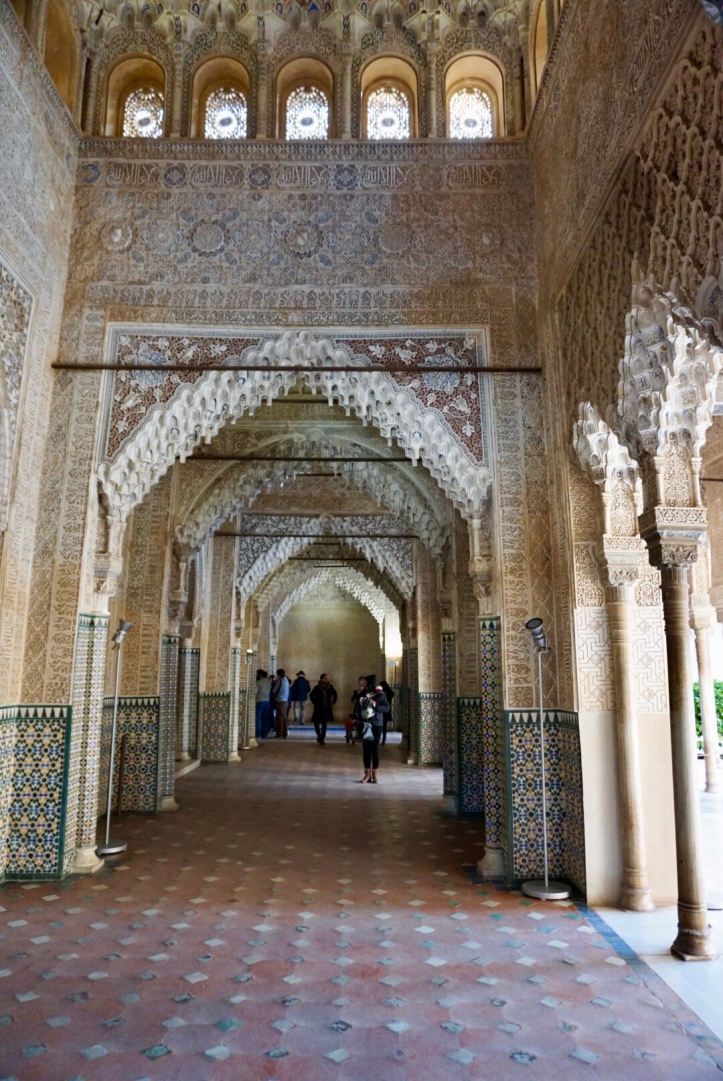 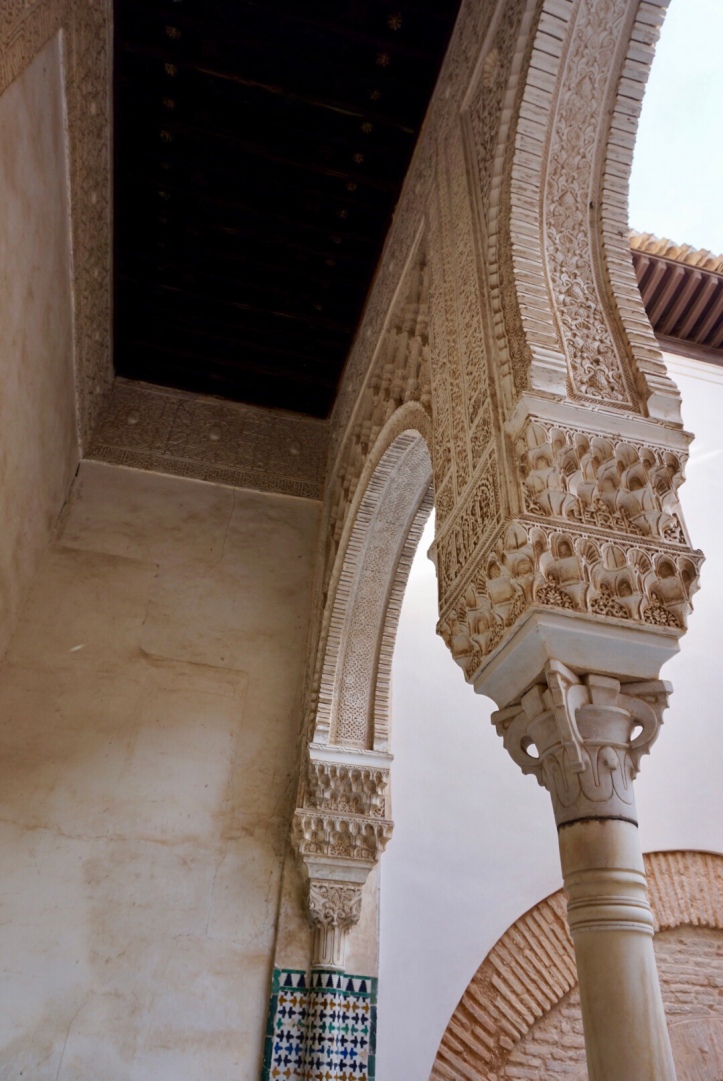 Rick Steves was luke warm in his recommendation to explore the oldest part of the Alhambra complex, however Sarah and I were excited to see the ruins of a fort dating to the mid 1200s.  While we were intrigued by the ruins, we couldn’t get enough of the breathtaking views of the Sierra Nevada Mountains that contrasted so sharply with the best city views we encountered of Granada. 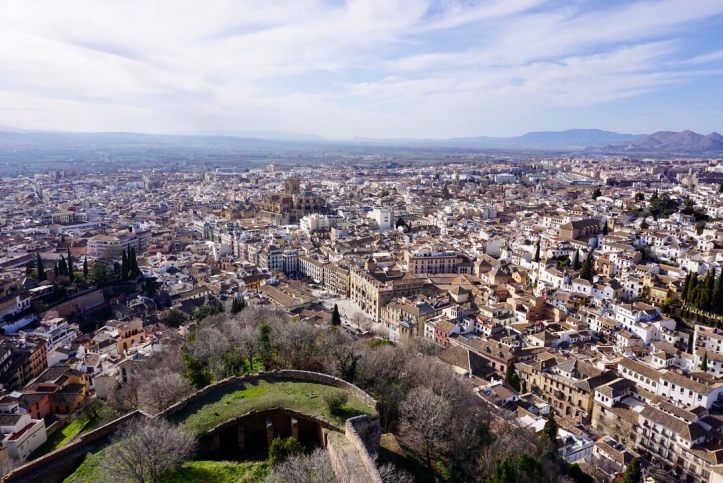 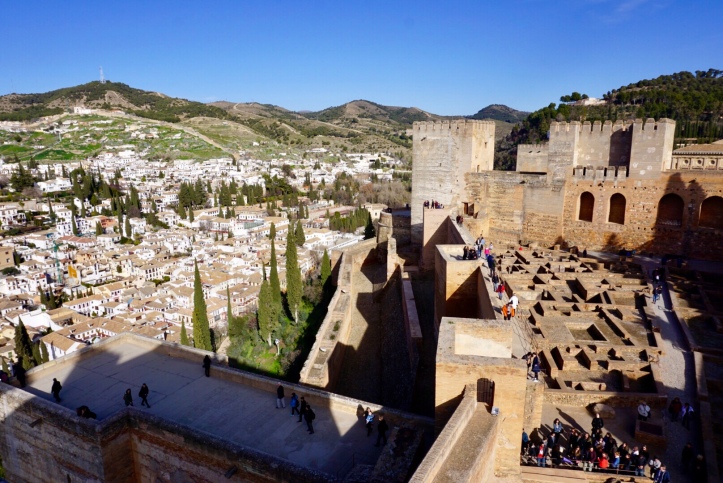 On tired feet, we headed to the Generalife Gardens, which were just as beautiful as promised. We couldn’t help but wondering the difference in the gardens from winter  season to the heat of summer. 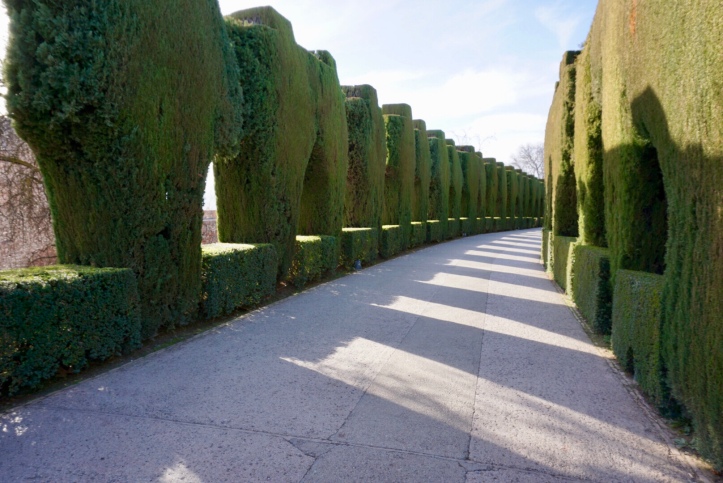 With hearing from multiple sources that view from San Nicolas at sunset was “one of Europe’s most romantic viewpoints” Sarah and I had this event as a must-have on our Granada adventure.  After finishing up at the Generalife Gardens near sunset, we hopped on the #C3 bus at the Main Entrance which deposited us back at the Plaza Isabel La Catolica.  After a very short walk around the corner to Plaza Nueva we took the #C1 bus to the Albayzin quarter. After getting off at the San Nicolas stop we hiked to the top of the outlook where it afforded the beautiful view seen below.  The viewpoint itself was a bit of a madhouse with a ton of people packing in, so with the sun setting behind a thick layer of clouds, we chose to forgo waiting for it to dip beneath the horizon and set out for tapas and drinks.  We spent the rest of the evening delightfully wandering around Albayzin, getting lost a few more times than I’d like to admit.

We had a relaxing morning planned in Granada before leaving for Ronda, with our only goal being centered around finally trying churros and chocolate, which was delicious I might add. Alas, our morning turned into a bit of a panic as there was a misunderstanding regarding our train to Ronda that was suppose to leave just after noon.  To hear more about our frantic Granada morning and our phenomenal time in Ronda stay tuned for my next post!