Wow, it has been almost a month since my last post highlighting our Spain Adventure! Where I last left off Sarah and I’d just climbed back on our train to Sevilla after a wonderful pit stop in Cordoba. While we didn’t feel overwhelmed with our action packed day, we made the rookie mistake of only snacking in Cordoba, resulting the dreaded hangry state by the time we make it to our striking Airbnb in Sevilla. While we were very quick to walk wherever we went throughout our trip, in this instance the 25 minute walk to the apartment from the train proved to be quite a test of our patience on empty stomachs.  Thankfully, months after our trip, as the memory of the hunger incident fades, Sarah and I have multiple times reflected fondly on that trek, specifically on how impressive that walk to the Barrio Santa Cruz district was from the train station. Starting out on the walk, we were surrounded by a modern city, but as we continued the city gained the delightful charm associated with stepping back through time. 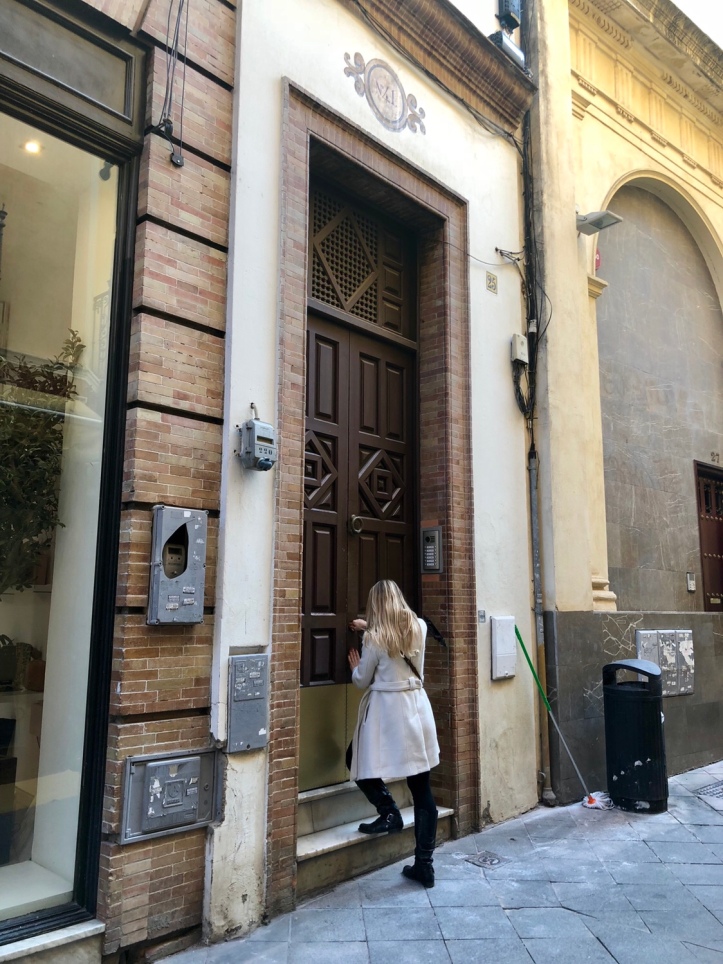 Sevilla Cathedral
After checking into our Airbnb, pictured in the two photos above, we ventured out to find food and go on the Barrio Santa Cruz Walk recommended by Rick Steves. Not surprisingly, we took wrong turn after wrong turn in the winding narrow streets.  Laughing at our present state of misdirection, we didn’t mind the unplanned detour as the city was remarkably unique and every wrong turn was viewed as part of the adventure.  Eventually we found our way to the Sevilla Cathedral, starting our tour with some difficulty picking out the specific statues or icons at night. We wandered around the Cathedral, absolutely blown away by the level of ornate detail throughout the exterior.

After wandering around the Sevilla Cathedral we stepped into the Patio de Banderas close to midnight where we found workers actively harvesting the orange trees pregnant with fruit.  One of the workers would climb into the tree and violently shake the overburdened branches causing all the fruit to fall to the ground. The resulting overwhelming smell of oranges will always remind me of this wonderful evening stroll.

Continuing on our tour we stumbled upon this beautiful courtyard that was both filled with orange trees and with a remarkable lamp that gives the overwhelming feelings of Narnia or Harry Potter. Lining this plaza was the flamenco show at Los Gallos that we attended the next night.

From here we made our way across the Guadalquivir River at night based on the recommendation of our rather handsome Airbnb host.  We ended up finding a small local bar with a beautiful view of the shoreline.  It was the perfect nightcap to a busy, packed day where we could hardly believe everything we’d accomplished in one very efficient day. 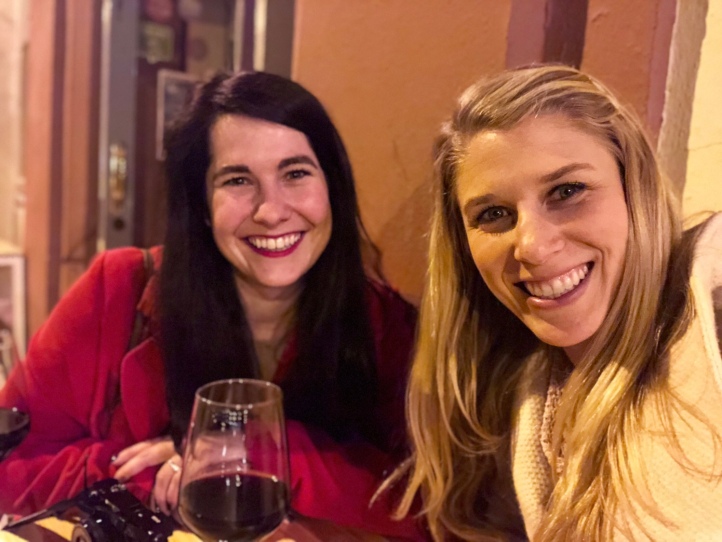 The next morning, we set out to explore the Barrio Santa Cruz during the daylight, but alas once again starting out in the wrong direction.  Eventually making our way back to the Cathedral, we were again overawed at the level of detail that was even more on display in the daylight. Following our morning coffee, we took a tour of this delightfully detailed Cathedral. 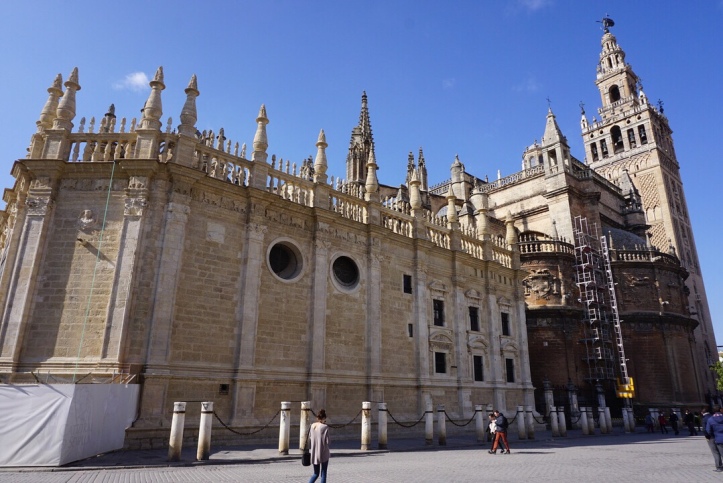 Pictures will never be able to do this stunning alter any form of justice.  One could spend hours and still find new images to look at in this work of art that took over 80 years to complete. There are forty four scenes from Jesus’ life depicted from floor to ceiling.

While in America in recent years Christopher Columbus has become a controversial character to say the least, in Spain there were many statues and memorials to this explorer that brought Spain much glory and riches through his exploration.  Housed in Sevilla’s Cathedral was Columbus’ tomb, although it was fascinating to hear to history of his remains as he was initially buried in Valladolid, Spain, before being moved to a monastery in Sevilla, then shipped to the Dominican Republic where they resided until being moved to Cuba. Once Cuba gained its independence from Spain (1898), Columbus’ remains were again shipped back across the Atlantic to reside where they are now in Sevilla Cathedral.

There is quite a large room in the Sevilla Cathedral housing a variety of glittery ornate pieces such as the Corona de la Virgen de los Reyes pictured below.  This specific crown has the world’s largest pearl used as the torso of the angel.  Although, I believe Rick Steves is missing an asterisk in his description, perhaps meaning the largest pearl in a crown or of that time period because if you Google that query there was a 34 kg one found in 2016.

Court of the Orange Trees

As we found throughout our trip in Spain, the Sevilla Cathedral also had its courtyard filled with orange trees.  For the first time, we saw the masses of tour groups congregating in this shady courtyard.  The overall effect, upon avoiding them until this stage of our trip, was to feel a bit claustrophobic.  In reality we were likely spoiled having only just been hindered by them, and even then the groups were probably at a minimum compared to the summer busy season. 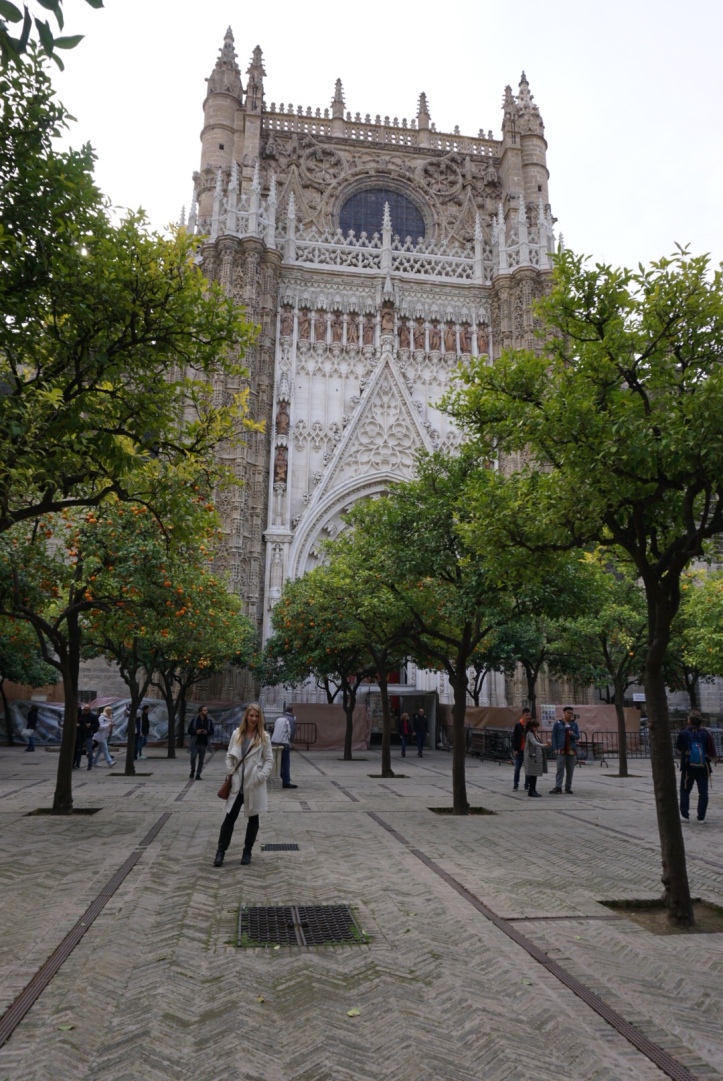 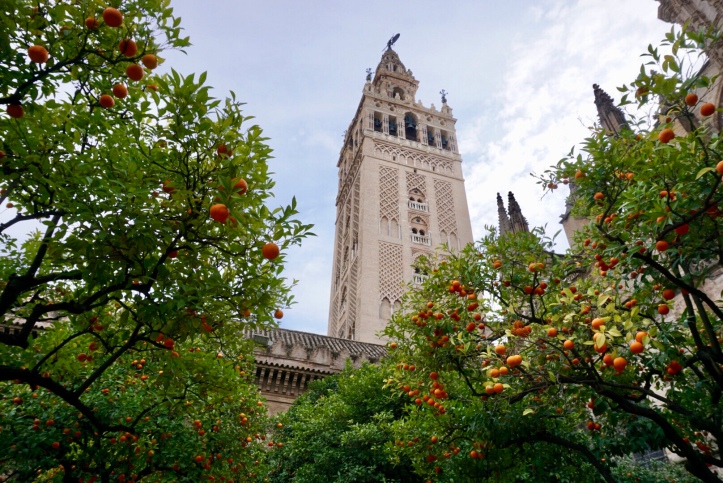 The last stop on our Cathedral tour was to walk to the top of the Giralda Tower in which the entrance was located in the Court of the Orange Trees.  The accent was very user friendly as it is comprised of a series of 34 ramps with a set of steep steps as the last obstacle to the top. There were windows all along the walk up, offering stunning views of the ornate detail on the facade of the Cathedral.  The best part is reaching the top where you are afforded remarkable city views of Sevilla.  Plus, when you finally pull yourself away from the amazing views, the decent is so much easier and quicker back to ground level.

Immediately after exiting the Sevilla Cathedral, Sarah and I walked across the Plaza del Triunfo to enter and tour the Royal Alcazar. We made the choice, based on our timing, to bypass the Upper Royal Apartments portion of the tour that is only available from 10:00 – 13:00. Regardless, we were duly impressed by this ornate palace that was interestingly built by the Christian ruler, King Pedro, using the same builders that constructed Alhambra. Reading about the Alcazar ahead of time we knew going into this tour that the layout of the palace could be confusing but we indeed did feel turned around by the time we reached the gardens. It made it rather difficult to follow the self guided tour we had, however every room we stepped into was novel and unexpected. 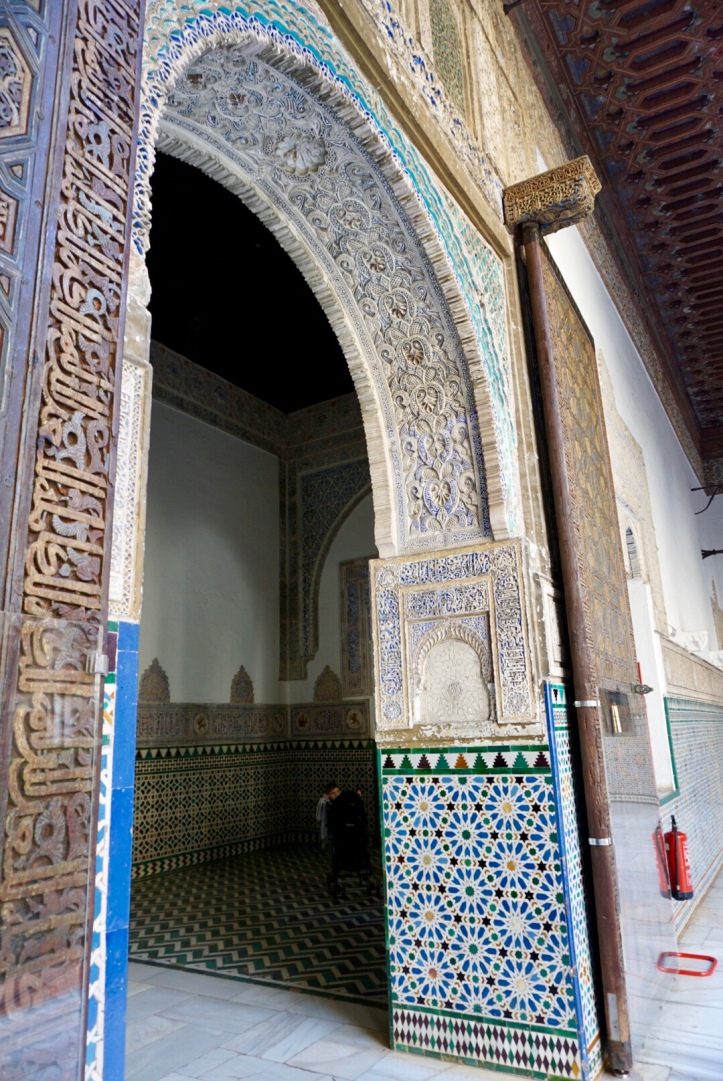 Courtyard of the Maidens

The center of the Alcazar houses the Courtyard of the Maidens that drummed up the strongest feelings of deja vu originating from Alhambra.  This part of the palace was definitely the most striking and memorable of the tour with many rooms opening up into the courtyard, therefore proving many visits and views of the room from various angles.

The end of our Alcazar tour opened up into the expansive gardens that one could spend hours exploring.  Despite our tired feet we spent quite a while getting lost within the greenery to see what surprises we could stumble upon. I’m sure the gardens would have quite a different feel in peak tourist season, however there were really only a hand full of people wandering along the paths, allowing a feel of seclusion while taking a relaxing stroll. 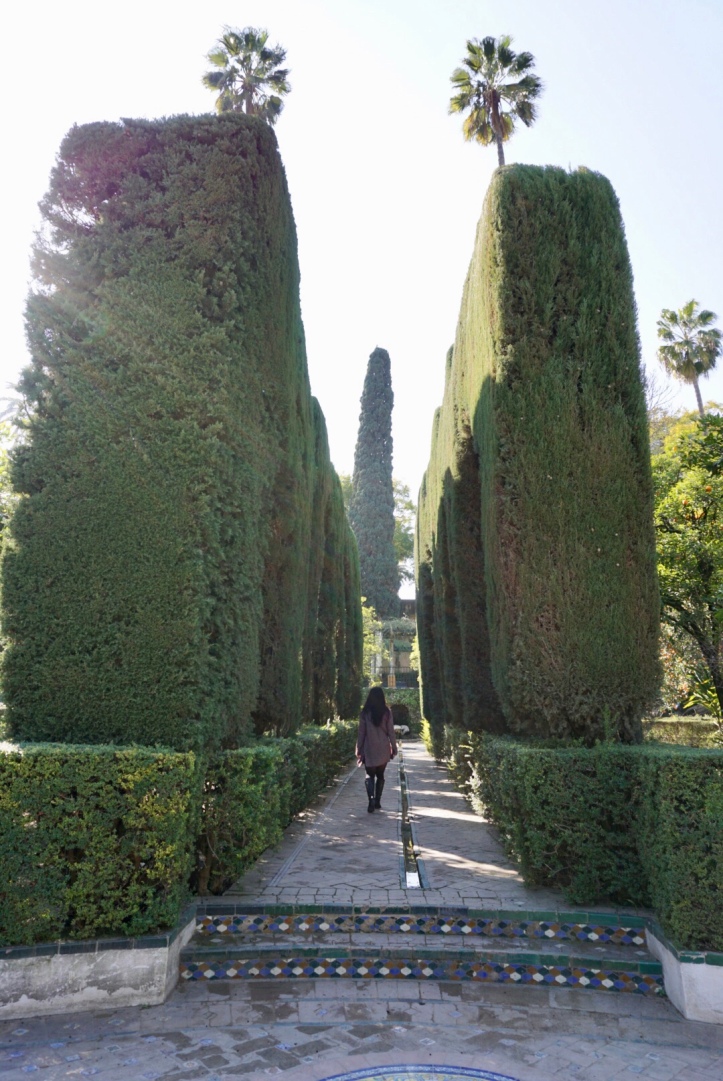 For dinner Sarah and I ventured to San Marco based on the recommendation of the cute customs agent in Barcelona who grew up in Sevilla.  We were surprised when the fare turned out to be Italian, however it was absolutely delicious. Plus the interior of the restaurant itself was unique and elegant, setting the perfect stage a relaxing dinner.

Sarah and I ended our Sevilla trip by heading to Los Gallos to observe a flamenco show. We were both really excited as we’d heard it was a must see, but didn’t know what to expect. Needless to say, we were both blown away, riveted on the edge of our seats throughout the whole show.  We were one of maybe ten other tourists in the audience resulting in an intimate feel. I can only imagine how loud the applause would be with a packed house.  On the entire walk back from the show, Sarah and I were practicing our flamenco spins, with the end result being overly dizzy. On a life is strange and full of coincidences, at 2 am on a random street in Sevilla by our Airbnb we ran into our friends from Israel that we had already ran into twice on the trip in Ronda.  Likely life was telling us that we should have exchanged names and contact information. Anyway, with our time in Sevilla drawing to a close, we tiredly climbed into bed as we had to get up early to catch our train to Madrid for the last leg of our trip.