As the concluding installment of the Analog trilogy, Breach continues the tempo set by the preceding novels with fast pace, edge of your seat action that keeps the reader from being cognizant of flipping pages. Taking place several years removed from where Borderless had left off, Breach picks up with a new point of view from a character who had been absent from the second book. Each book in the Analog trilogy has had a different character holding the reins, and as much as I loved Dag and Diana in the first two novels, I was giddy upon turning to page one and realizing Emily would be at the helm for book three. While Bandwidth revealed many of Emily’s secrets, her inner workings were still enigmatic, which her continued exile in Borderless only served to heighten her intrinsic appeal. Viewing the many familiar characters and their growth throughout the series through Emily’s tortured, yet brilliant eyes was refreshing, ultimately adding a feeling of culmination to the prose. Leading up to the final chapters, I found myself uncomfortable because I couldn’t see how the ending would play-out in a way that held true to the remainder of the novels.  That being said, I shouldn’t have doubted Peper, as he surprised me with not one but two unexpected plot twists within short order, wrapping up his trilogy in a way that I couldn’t help but feel was an ideal ending.  This was my fifth novel by Peper, i.e., Neon Fever Dream, Cumulus, Bandwidth, Borderless, and he continues to hone his craft with each subsequent book. I can’t wait to see what he will  next have in store for his readers, although I’ll wager a guess that in some obscure way it will tie into the literary world he is already created with his previous works. Overall, Breach brought our favorite characters full circle as Commonwealth along with their own lives are again in danger from a familiar, infamous source, making this read nigh impossible to put down. 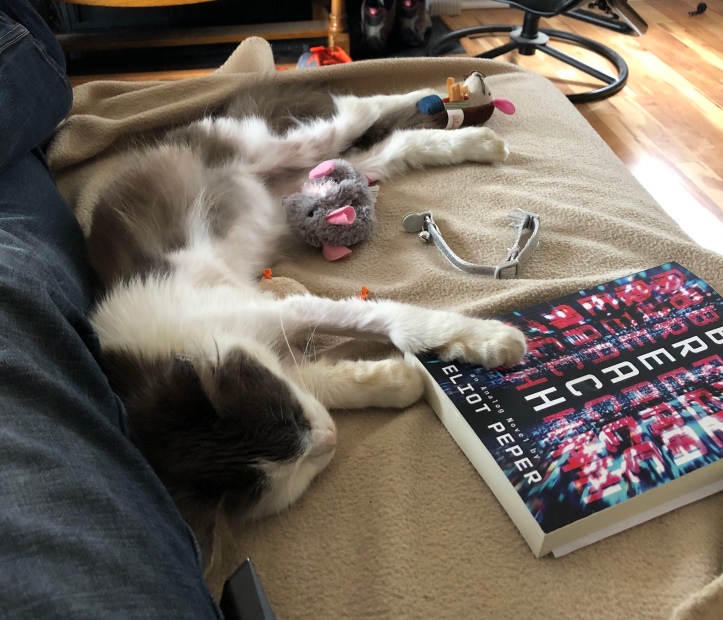 On a happy note! Meet Izzo, aka Izzy! She approves of Breach too. Izzy showed up at my parents’ farm a month or so ago in very rough shape. She now has a clean bill of health and loves playing fetch. Do we have a cat or dog you might ask?

When reading it is common that I encounter words that I’m not privy to the exact definition, however it is easy to infer the meaning of the aforementioned word based on the context of the sentence and story. As such, relatively new to the Critiquing Chemist, you’ll find an additional section that includes vocabulary words that I encountered upon reading the book being reviewed and either had to look up the definition or it is a word in which I would like to add to my repertoire. This endeavor is easier when in the Kindle format, and potentially impossible with audiobooks, however I’m going to attempt to continue this section for all future book reviews. I’ll be using the definitions from the Merriam-Webster Dictionary.

Liminal: of, relating to, or situated at a sensory threshold

Detritus: a product of disintegration, destruction, or wearing away

Spiel: to talk volubly or extravagantly

Fugue: a disturbed state of consciousness in which the one affected seems to perform acts in full awareness but upon recovery cannot recollect the acts performed

Plutocrat: a controlling class of the wealthy

Aperitif: an alcoholic drink taken before a meal as an appetizer

Megalomaniacal: a delusional mental illness that is marked by feelings of personal omnipotence and grandeur

Ineffable: incapable of being expressed in words

Dox: to publicly identify or publish private information about (someone) especially as a form of punishment or revenge