The Core by Peter V. Brett 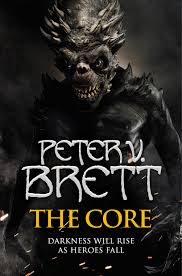 Happy Release Day (UK and AU) for The Core!! My review for this last installment of The Demon Cycle was originally posted back in late August, deliberately sans the spoiler laden additional insight section.  In this repost you’ll find my thoughts and questions regarding The Core restored in the aforementioned section.

In January, The Demon Cycle series had so consumed my thoughts and attentions that I’d  even begun to ward everything in my dreams. For months now, I’d been eagerly, if not impatiently, anticipating the release of the culminating novel, The Core. When Brett offered a diorama contest to win an ARC book I couldn’t resist throwing my hat into the ring! See the last section of my Birthday post for a general synopsis of how I made my submission for the contest, however I must say it was quite entertaining brainstorming and constructing the diorama, in many ways harkening back to projects of my youth. Needless to say, I was ecstatic when the winners were announced on my birthday and my design, inspired by an iconic scene from The Warded Man made the final cut. After a few days, my brand new ARC found its way into my mailbox and has hardly left my side since. To say that The Core is action packed would be a significant understatement, as I could hardly stand to put down this hefty novel. Each POV, spread throughout Thesa brought forth much edge of your seat, page turning anxiety as the readers endure a whirlwind of emotions regarding the fate of many key characters. My favorite aspect of The Core, was the exploration to novel’s namesake, emerging as a whole new world within this already well established literary realm. One regret I had, of which I’m completely at fault, was that I had yet to read the novellas for this series, e.g., Messenger Legacy, The Great Bazaar, and Brayan’s Gold, that would have served to build the backstory and depth for a few relatively new characters, such as Derek Gold, Stasy Talor, and Briar Damaj. As I had a large time gap  between The Skull Throne and this final installment, in hindsight I should have fit in the novellas into my reading schedule, alas let’s chalk it up to inerva. Regardless, any fellow blogger that frequents my reviews knows that an easy way to my literary heart is by highly detail oriented, thorough world building, of which Brett has excelled at throughout The Demon Cycle series. While it tugs at the heartstrings to come to any journey’s conclusion, Brett has taken readers on quite the adventure, filled to be brim with action, while managing to span a whole spectrum of emotions, with the overall result of which The Core providing a most fitting ending to this delightful series.