Over Memorial Day, Samuel was moving back to Michigan from San Francisco so we were lucky enough to go on another fantastic, jam packed road trip hitting eight National Parks in four days. In the past three days of our trip we drove to Great Basin National Park in Nevada before hiking Angel’s Landing in Zion National Park, and exploring Bryce Canyon National Park and Capitol Reef National Park. We hiked to the Delicate Arch in Arches National Park and were blasted by the wind in Canyonlands National Park.  We started off our last day of the road trip becoming absolutely enamored of Mesa Verde National Park where we ended up spending hours longer than anticipated, which brings us to the last park on our itinerary, Great Dunes National Park. Having grown up in Michigan, I was skeptical of this park, having floundered in the massive dunes at Sleep Bear Dunes National Lakeshore as a kid.  Sleeping Bear is beautiful and impressive, especially set against the picturesque Lake Michigan.  Needless to say, I shouldn’t have doubted because there’s a reason why this area in the middle of Colorado was deemed a National Park.

After leaving Mesa Verde we had approximately a four hour drive to reach to the Great Sand Dunes National Park, in which we had to cross some rather lofty mountains.  On the other side of the mountains, we encountered land that was incredibly flat and interspersed with both livestock and dilapidated buildings. In the far distance we could see there was another set of mountains that we would have to eventually cross. We’d assumed that the national park would be on the other set of these mountains, so we settled into the drive as we gaped at the flat lands that were vastly different than the land we’d been exploring over the past couple of days.  As we drew closer, approximately 40 minutes from the park, we noticed a strange smudge against the base of the mountains.  Much to our surprise, we could soon discern the sand dunes, that seemed disproportionate with the mountains rising up in the backdrop. It causes an optical illusion that appears to shorten the mountains, making the dunes appear small in comparison. 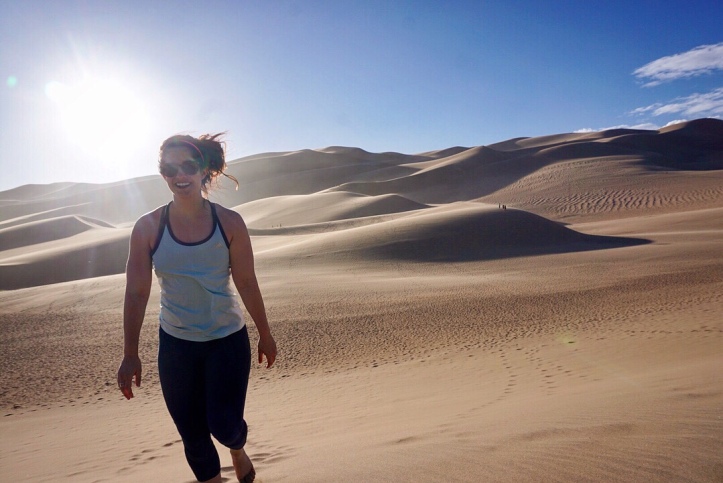 There’s no scenic drive in this park, only parking lots where you can then walk your way out to the dunes.  Let me be the first to attest that the dunes are so much further away than they appear. Our legs, already tired from our ambitious schedule did not appreciate this last sandy obstacle.  The dunes with the mountains in the back ground were absolutely breathtaking and we wish there had been more time to try to hike to the top of the highest of the dunes, but alas our time was short as we had quite the drive home ahead of us.

We ended up making it to one of the first dunes, which really struck home how far away and massive the highest dune was.  The people lounging at the top were tiny specks even as dune didn’t look that far away.  In the photo below you can see where I’ve circled two of the tiny dots to give you an idea of the sheer mass of this sandbox.  Can you spot the people? Next time we venture to this park we will bring sleds with us as we saw people cruising down the dunes, which looked like a blast. 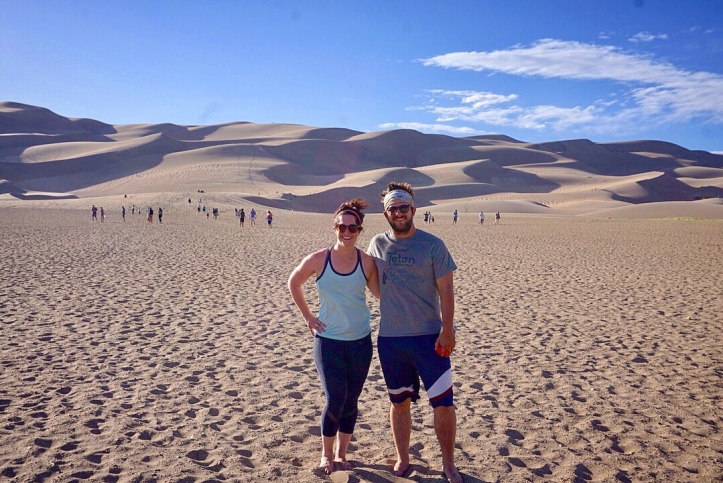 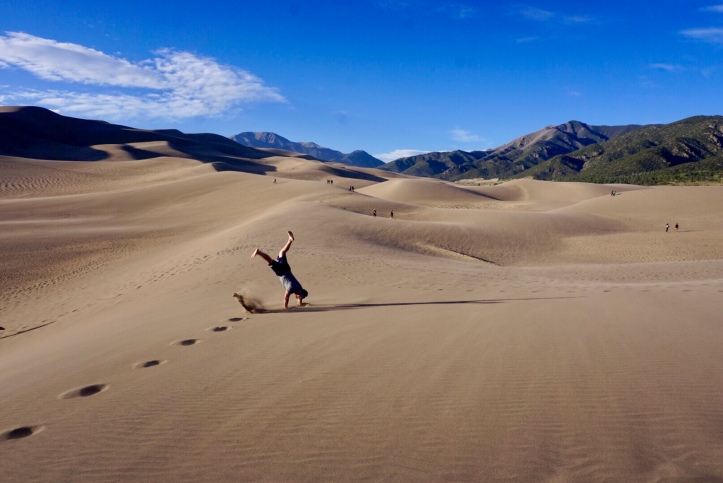 After playing around in the sand for a little bit we headed back to the car where we had a 22 hour drive ahead of us.  We had the option of camping one more night, but that would have resulted in us home around midnight of Memorial Day.  I’ve never been on a road trip where we had driven through the night before but it was worth it to get  home at a relatively decent time.  Samuel and I took turns switching back and forth every two hours so we didn’t get overwhelmed with the driving, while the other person slept.  There was a mini crisis a few hours after leaving Great Sand Dunes National Park as there is little to nothing in terms of fast food restaurants in south eastern and western Kansas. Hangry is a very real and dangerous state while on road trips and I may or may not have succumbed to its clutches around 11pm on the drive. Thankfully we ended up  finding a Subway at the first gas station we’d found in hours that was still open around midnight. The rest of the trip went smoothly through a haze of caffeine.  Overall, the trip as a whole was wonderful and special as Samuel and I packed in the absolute max over a long weekend where we saw some of the top wonders in America. Plus, there are always the feels as one pulls into their home driveway after a long and grueling road trip.